I have created an openframeworks project in xcode and would like to run it on my laptop that uses visual studio and then make an exe file from visual studio. is it possible and how?

you could make a new empty windows VS project and then cut and paste your code from the mac project into the windows project?

that is a last resort option however thanks for mentioning it. are there any things i should be wary of for my program thats been made in xcode?

) you could just copy over the /src folder from one machine to another as well.

I just did this. Visual Studio runs the project fine, but in order for Intellisense etc. to recognize stuff there are a few settings to put in. Answer for VS Code on Mac

This worked for me! I much prefer VS Code to Xcode personally.

I have created an openframeworks project in xcode and would like to run it on my laptop that uses visual studio and then make an exe file from visual studio. is it possible and how?

If the above question is: I have a Xcode OF project on Mac and I want to compile it on Windows with Visual Studio.

The easiest thing to do would be to: 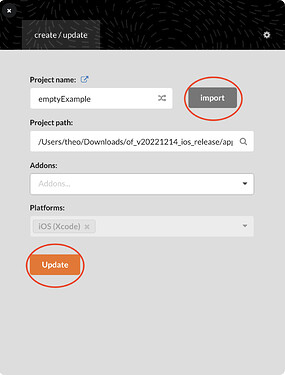 Then you should be able to open the project in Visual Studio and build it without issue.

Thanks this is extremely helpful and exactly what i was looking for.

There is I think. My answer was for VS Code as a Mac app.

@ali312312 if you are on Windows I think using Visual Studio as I mentioned above will be the most straightforward.

If you are on a Mac and don’t want to use Xcode @joshuatazrein 's guide is the way to go.

It is possible to use VS Code on Windows but it is a more involved setup.

well the situation is that I had used xcode to make a project with only openframeworks but my school wants it done on windows visual studio so i am having to transfer everything and make it work on visual studio. Also I prefer visual studio rather than visual studio code anyway and the more steps there are for something like vs code will mean theres more things to mess up if not done right so I just want to make my Xcode project work on my windows pc with visual studio then be able to do things like run the program, make an exe file and create a makefile.

That all makes sense. The Visual Studio steps I shared should be all you need then

Just wanted to update everyone. I copied the src files and managed to create a new project and just put those src files. I ended up running into a debug assertion error that wasnt caught on xcode but was caught on visual studio. I have now fixed it and the project works perfectly. Thanks to everyone that helped.