Hello there!
I’ve recently switched to the master github branch and all of a sudden discovered that it’s now possible to run app in simulator (I’ve always had problem with that and stopped trying around a year ago). In XCode 6.3 the app started, but XCode immediately crashed. Anyone knows if it’s fixable? 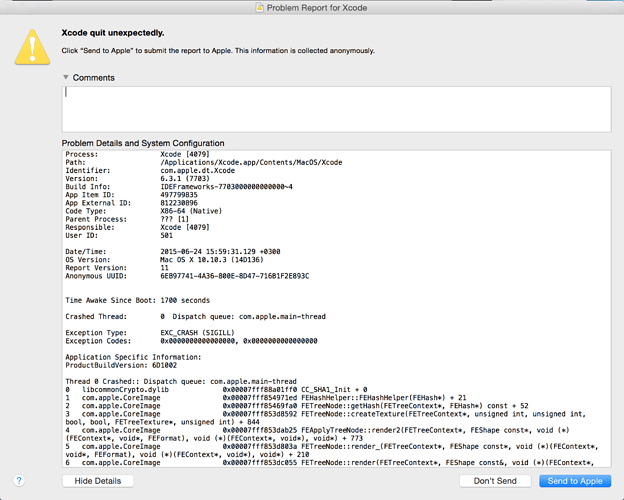 I haven’t figured out why, but I can confirm this is an issue for me as well.

Not completely sure. I’ll have a look with a friends laptop with a new checkout see if it happens.

Yeah my friend had the same problem.
Also he had in the past previously run the iOS simulator before on an older Xcode version. 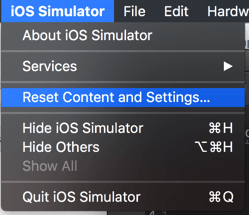 Hey @danoli3 thanks for the tips! I tried all … no success.

this might be related with the fix for liburi, @danoli3 did you applied the patch for osx to ios too?

Make sure you have your apple developer account associated with Xcode.
I think it may be related to the Code Signing.

iOS Simulator might be failing to acquire a positive code sign (it really doesn’t need to, but currently I notice it only has 1 target).
I’ll PR a fix.

what examples are you trying? can you try if it crashes with an empty example? in osx it wouldn’t crash before the fix unless there was code from liburi involved, which is only used in ofImage and ofLaunchBrowser i think

@bakercp try and do a Release build. If that works 100% we are looking at an optimisation issue. Either that or we are just exposing it.

I wonder if it is the GCC_OPTIMIZATION_LEVEL = 0 change caused this.
Could be too much data for some Mac’s to handle.

Sadly it’s still crashing for me using a release build … it could also be an xcode bug of some kind.

See if a clean build / and if this is not happening. We have to slowly track it down.

If it’s any help - I’m experiencing the same issue on my project. Pulling latest master crashes xCode (not the simulator or the app that runs without an issue). It doesn’t seem to be environment related or related to a specific project - just pulling the latest master causes this.

@bakercp the error is the same that i reported a few days ago for the OSX builds after the poco removal
https://github.com/openframeworks/openFrameworks/issues/3943

@arturo solved it with a change in liburi, but maybe that fix not work for iOS?

The quickest way to check it is to comment the URI check part on ofImage.cpp load function, specifically this part, in line 177:

If commenting that resolves the crash, it is related to the same issue.

Can you try with an empty project to see it the crash happens? In my case, didn’t, so I had that time to comment all the code and start to activate it line by line to figure out the class that was creating the crash.

It does crash with empty example.