Which Ubuntu version for least pain.

With the purchase of new hardware I am looking to refresh my ubuntu installs on all my rigs.

With 0.061 which version of Ubuntu are people finding requires the least amount of tweaking (because I spend enough time tweaking anyway)?

Also, one of the new pieces of hardware is one of the i5 Core Macbook Pro’s so I am hoping that Lucid will play nice with 0.061. Anyone have experience with Lucid & 0.061?

Arturo, being always several steps ahead of everyone else already has Lucid running 0.061 on his macbook pro (natively, not through virtualbox or something)…

He said he had to tweak the touchpad drivers or something, but he can tell you that better than I. Otherwise works fine.

I would go for Lucid…it looks very slick, and it’s an LTS. And 0.061 is definitely better than 0.06. It has the new compiled OF lib…hugely reduced compile times, and also uses GStreamer for video input now, which means a lot more cameras are supported. My laptop camera only works in 0.061 for example.

Arturo with 0.061 happily on Lucid = confidence enough for me to go for Lucid.

i’ve needed to do some minor changes to 0061 to make it work in lucid. just for the videoplayer. will publish them soon.

I just upgraded to Lucid, and after some minor troubles I was able to compile some apps.

I had to first apt-get remove all the dependencies in the install_dependencies script and then run it again; i also had to compile the project in …/libs/openFrameworksCompiled/project/linux (debug and release).

As arturo said, the videoPlayer is not working properly. There seems to be some problem with the texture allocation, and after some time, it just quits. The error messages in the terminal are always different, ranging from problems with libgst, gstreamer, nvidia, libavformat to just a single segfault line… i can’t recognize any pattern in the error messages, it’s just different everytime

I’m not running from a fresh install of lucid, i just upgraded from karmic. maybe that’s the source of the problem?

I’ll just wait for arturo to publish your corrections and try it then.

by the way, here i attach a screenshot of the problem with ofvideoplayer… seems like a texture problem. not really sure however 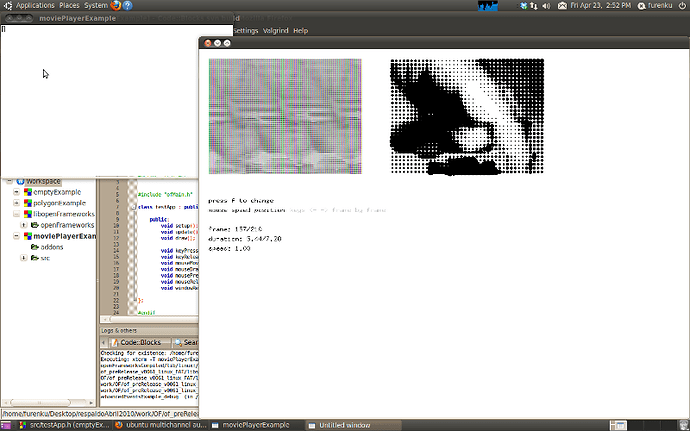 yes, the problem is by default gstreamer now uses 32bits so you need to explicitly specify that you are using 24bits. what you see is a 32 bits bitmap uploaded to the texture as 24bits.

i will upload the changes this weekend

Yay!
I am looking foreward for the changes, currently I am running under windows but the pain that I today had with the PS3 eye under windows is too big to have it on all platforms that I wanna use…
I hope the pain with Gstreamer is less

yes, it is. ps3eye worked out of the box for me on karmic.

just uploaded the changes to github, just by overwitting ofGstUtils.h and .cpp in libs/openFrameworks/video should be enough:

will upload the package to downloads soon

arrrgh! updated to lucid today - I do regret it. Well, at least after a few hours of nerve-wrecking trying this and trying that I’m already able to boot and login :evil:

I re-installed codeblocks in order to get rid of the “Didn’t found configuration for libraries”-error. Ok. Now if I compile my oF project, I get loads of "undefined reference"s to various glu*-classes. Never had a problem with that before I did the update.
I have libglu1-mesa and libglu1-mesa-dev installed.

Does anybody have an idea what I could do to fix this?

Fixed the linker problem by adding -lGLU to the makefile (in the line where -lglut and -lGL are also added). Seems straightforward enough - but why, oh why did it work without this option before???

i would like to reply to that post, because i had the same problem like sinasonic. I didn’t know that the libs have to be added too. Arturo is this normal? Or what was the fix? You said that it will automatically search for lib directories, and just addons should be added.

For everyone with screenshot of makefile
[attachment=0:38051eis]libs.jpg[/attachment:38051eis]

however, thank you arturo for your fast reaction

libGLU doesn’t come with the OF package, it’s installed at system level so it cant be autodetected. Don’t know what’s the reason why it stopped working, i guess the functionality inside libGLU was in some other library like libGL or something similar, and it’s not there anymore

Can I ask if anyone else is suffering from Seg Faults when running audioInputExample on Lucid? The issue seems to be around receiveAudioBufferingAndCallSimpleApp.

Only occurs when I exit the app. When I run the app again, it will not take audio input. If I run it a further time it works. It’s like when it seg faults, it leaves something in a dirty state.

Yes, I get a segmentation fault at exit, too.

is this with the version in github?

I am using vanilla 0061. Will give the github version a whirl a little later in the week and will let you know the outcome.

arturo: I’ve had chance to test this. I am still receiving seg faults when running audioInputExample with the git version of OF on lucid.