Hi there !
I’m trying to compile the polygonExample with a freshly new install of Visual Studio 2017, installed as follows:

[image] If you want to use 2017 visual studio with the current open frameworks just click c++ development and click where my mouse is on the right side of the screen. You want to download the 2015 toolset. Then after you just have to not upgrade to 2017. Then it should work.

When compiling i got loads of erros like this:

image.png2265×894 82.3 KB
Sorry for the french version but it generally says that a caracter is missing or is unexpected in a source file

Can anyone help me ?

did you try creating the project with ProjectGenerator?

First I tried without using it and I got errors as shown, then I updated the project with the ProjectGenerator but I have the same problem now … 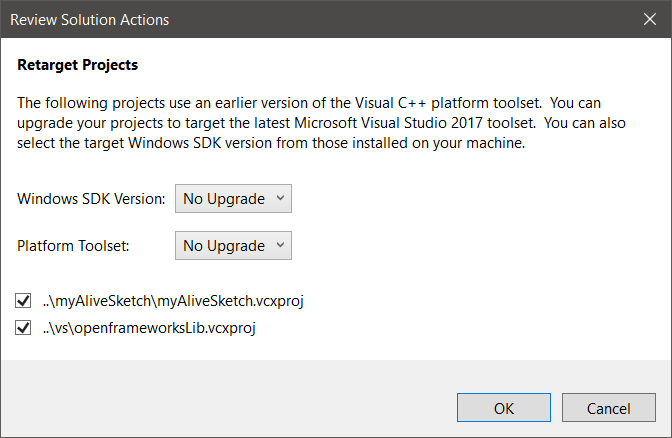 Thanks for your answer again !
I upgraded the project before so I think I can’t rollback the upgrade …
So I Loaded another example project (blendingExaple), updated with the projectGenerator before and not upgraded with an SDK or toolset and now I have to deal with theses errors:
“C1083 : Unable to open include file: ‘winsock2.h’: No such file or directory”
"LNK1104: Unable to open file : ‘Ws2_32.lib’ "

As far I search over internet it’s seems to be an path problem of the SDK ?

Which modules did you install with visual studio? The installer gives a lot of freedom but some parts are needed to compile OF. I Had to explicitly check the windows 8.1 SDK and the Windows 10 SDK 10.0.15063.0

random question @Gui96, have you tried repairing your VS2017 install? I had a few things go wrong after I uninstalled vs2015, but a repair fixed them.

Hi, I didn’t tried but I 'll try it out in few days. As a partial solution I’m debugging on a Linux OS which works really good but without a good IDE. Any recommendation ?
Thanks for yours replies !

Did you try Qt Creator? It’s no match to Visual Studio but still a decent IDE to work with. And has good integration with OF

But, anyway, VS 2017 on Windows should work. May be trying a fresh install in a virtual machine could give you a hint about what’s happening in your current installation