Hi, I spent maybe two hours trying to get something that looks like “normal shading”, but no matter what I do, I don’t see specular highlights nor normal shading (it’s either burnt white or ambient light).

I decided to try the 3DModelLoaderExample, just to see how it’s done there, and to my surprise, I can’t see any of the models by pressing keys 1 to 6.

I started to connect dots, and remembered that if I try to use ofVboMesh it crashes, and for that reason I can use ofxGui. Together with issue #5409 https://github.com/openframeworks/openFrameworks/issues/5409 (ofSaveFrame() crashes on my OF), I thought… hmmm… maybe there’s really something going wrong here?

Does any of this ring a bell somewhere?

I’ll be at the Berlin meetup tomorrow, in case anyone wants to take a look

can you post a stacktrace of the crash? almost everything internally uses ofVboMesh to draw so it’s strange that it’s crashing if you explicitly use it in your code but only draw nothing if it’s used from OF internally

This is what I see: 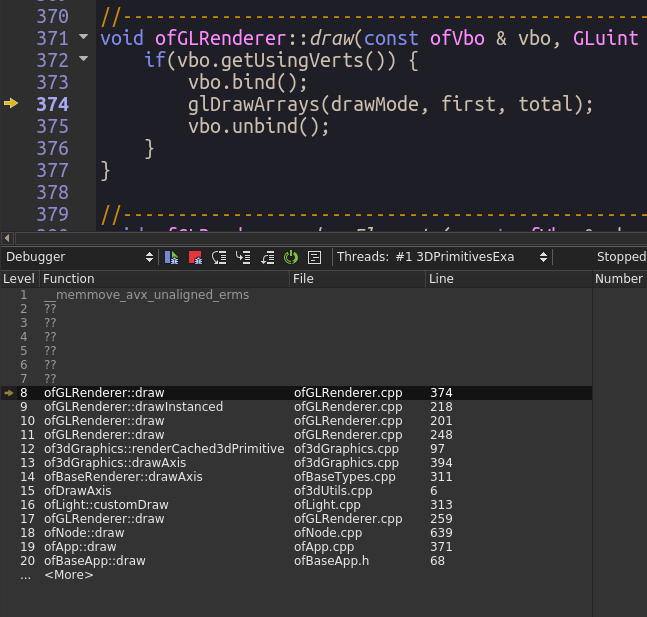 drawMode is 1, first is 0, total is 6. That happens on 3DPrimitivesExample when I press l to show the lights.

But even without triggering the crash, I wonder why are no shapes visible?

It seems like all the issues I was having are resolved by what you mentioned yesterday at the OF meetup: in ofBufferObject.cpp, set GLEW_ARB_direct_state_access to false to disable code that does not work with my Intel Graphics 4600. After doing this, lights and shading works, ofSaveFrame() works too.

I see this comment in the code: “we use this to test whether the driver is OpenGL 4.5 ready”. This seems to be failing, because in my computer the variable is set to true even if according to

can you post the output of grep | direct_state_access here: https://github.com/openframeworks/openFrameworks/issues/5422

FWIW, OpenGL 4.5 is coming to Haswell (which includes the HD4600). You just need to update to Mesa 17…if you are on Ubuntu there’s a ppa for that, the padoka:

Nice! Thanks for the news

It seems like my system was updated, because now running the same command above, I get this:

In case this happens to anyone else, I wanted to point out that the github master version still suffers from the same issue on my system with Intel Graphics 4600, even if it should be supporting GL 4.5 now.

In ofBufferObject.cpp I need to replace every (8) instance of

to get 3D rendering work, which I test by running 3DPrimitivesExample.