hello,
I am very new to open frameworks.
I am not able to build in Xcode app.
these are the steps I went though
I created a project from the project generator file in the open frameworks folder, an Xcode page opened.
when I write a code in the draw space and try to build, I am getting the message build failed, and I see a red talinedrawDebug in the left column

I opened the show error symbol and asked to perform the tried to build again
2 days ago it was failing all the time.
yesterday I tried the same steps again and it worked perfectly. I was able to build several shapes and use colors with no problem.
today I tried to crate a new project and I am having the same problem. build failed.
I tried to open the project I created yesterday and that was working perfectly and tried to build : same error : uncategorized , and command Ld failed with a nonzero exit code
I am putting a screen shot of the error

any ideas about how to solve this issue? 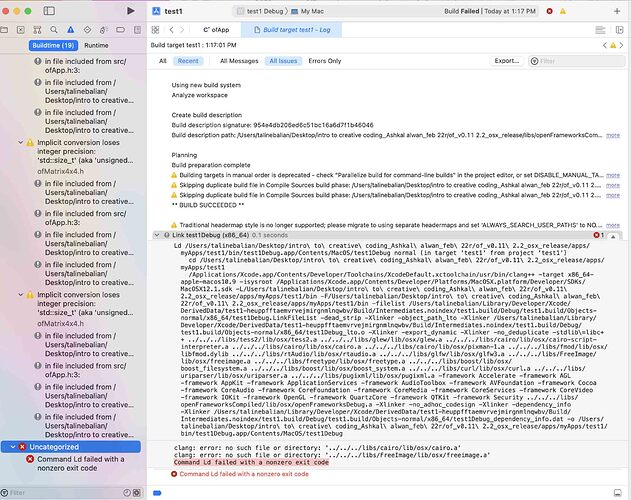 did you get openframeworks by clone from github?
then, you need to run scripts on terminal this:

thx for your answer. I downloaded it from download | openFrameworks
should I run that on terminal anyway?

if you are using the release version you dont need the terminal.
Strange that it worked at some point and then it did not.
Try re generating the project with Project Generator. Just open Project Generator and drag and drop over it the project’s folder (the one that contains the xcodeproj file). Then press update. Remember to close the xcode project before doing this.

hmmmm…
it is strange…

i don’t have monterey, only catalina and big sur.
at first, let’s try what Roy says!

I tried but still having the same problem

I dont have Monterrey either so I can not try it.
But, I can also see that in the file path to your project there are folder names with spaces. Sometimes that creates problems. Can you try to rename those so no spaces are found in the file path. Once done regenerate the project and try again.

Also, the error message shows some files that it can not find. can you find those manually? Just to check if those are in place.

I think the spaces in the file path Roy points out could be the issue.

If you can remove the spaces in the Intro To Creative Coding folder and also in the OF folder that should fix it.

I removed all the spaces in the titles and restarted my Mac. still;l not working ! it is driving me crazy!!!

if it the spaces there is the path “intro to creative coding … Ashkal alwan” with spaces too.

Do the examples run without issue?

The error messages suggest that the libs are missing. Where are the apps you are generating with the Project Generator located relative to the OF Root? Are they all in OF_ROOT/apps/myApps/?

I wasn’t able to run the examples.
the apps I’m generating are in the of_v0.112.2_osx_release/apps/myapps

Also, the error message shows some files that it can not find. can you find those manually? Just to check if those are in place.

Did you try what roy says? with ls command or Finder GUI.
Do libs/cairo/lib/osx/cairo.a and libs/freeImage/lib/osx/freeimage.a exist? 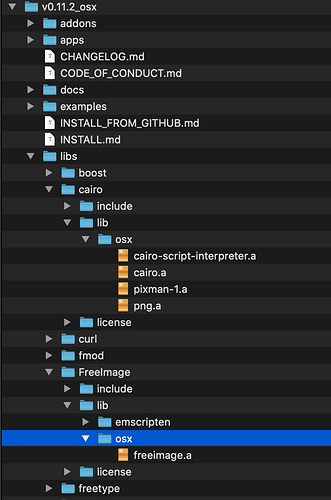 everything is in place
freeimage.a is in its place but it is in the cloud, can that be the problem? actually lots of the files are in the cloud as I don’t have a lot of memory space on my Mac. can this be the issue?

yes this can definitely be a problem. tools like iCloud and dropbox often create the appearance that a file is there but it only gets downloaded when you click on it or interact with it. unfortunately when compiling OF code, there are a variety of files that need to interact with and if they are not physically present you may run into issues. Another common iCloud error is having issues with code signing

It’s often the case that unless I run the command xattr -cr on the directory of my project, Xcode fails to build the project and reports a codesign error. Typically I find that this command needs to be run every 10-15 minutes. Can I change something within the project or Xcode to avoid doing this? Thanks for your help. David

in general I recommend that you not use iCloud for the OF folder.

thanks everyone!
problem solved!
it was because some of the files were in the cloud