From searching this forum I can see that there are plenty of people who are using the FireFly on their projects but I can’t seem to find any discussions regarding the specific problems I am having.

I’m connecting using firewire to an iMac with snow leopard installed. Has anyone been using the FireFly MV to get a colour image NOT a greyscale image?

Not sure if this is an OS issue and a PC gets colour perfectly? Could this be a libdc1395 issue? I saw there was a ofxVideoGrabberPtGrey addon too, has anyone has success with this?

The final project involves Flash so Ideally I’d like a solutions that solves the colour problem in Mac not just oF but I will take what I can get.

Have you tried it with the ofxVideoGrabber addon?

Thanks for recommending that grimus, I’m just reading through a large ofxVideoGrabber topic on the forum at the moment. I’m in the studio at the moment so I will have to wait until later to test this out as oF is all on my laptop at home. Fingers crossed I can get something happening. I’m also taking the entire setup round to a friends tomorrow morning to see what support Windows will have for it out-of-the-box.

Hi Grimus, Thanks for suggesting the addon. Although I can’t seem to be able to get it to compile properly. I’ve got 213 errors at the moment? And I can’t seem to find out why.

I’m running everything to xcode and although the layout of the addon isn’t the same as many others I’ve still dropped it in to the correct level of my apps folder but can’t get it compile.

yes I haven’t yet converted it to a proper addon…can you try and open the Xcode project I supply and see if that works? You will have to manually pass it the right resolutions…

That’s strange. I am using your xcode project completely. I just downloaded it all, places the entire ‘ofxVideoGrabber’ folder in the appropriate folder but it wont compile. To test everything I’ve just installed XCode and oF on a different machine at the studio I’m working. Every other example compiles without a problem but I can’t get your xcode to compile at all. At first it tells me there’s a problem with the SDK. 10.4 | Base. As I’m on snow leopard. Then as soon as I change it to 10.5 or 10.6 I get 213 errors? I’ve scrolled down and it’s the same as the screengrab I posted previously.

As an update, If I double click on the openFrameworks file in the overview panel on the left of XCode so it brings up the projects info and change Base SDK to ‘Current Mac OS’. This only gives me 2 build errors which I’ve attached a screengrab of. 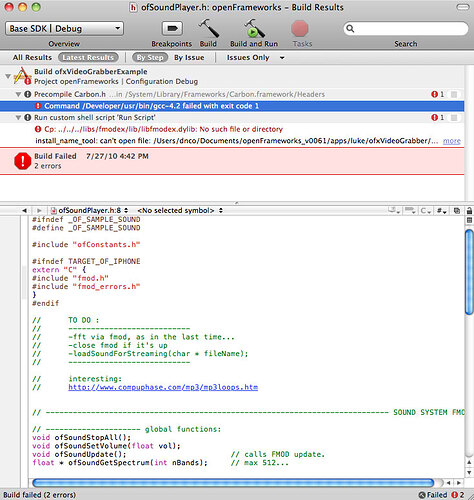 Hi luke, you should check that you are building in the right version of OF. My guess is that you are trying to compile a 0.06 project in 0.061.