Hi there,
I think I need a tree implementation for what I try to achieve.

Basically, I start to grow the tree (and visualize it).
First branch… growing… this is a polyline basically.
Then, first branching. It can be another polyline.
etc.
No problem.

BUT, if I want to replay the growth, I’d need to store some sorting feature.

I thought about creating a class having:

Any ideas or opinions would be VERY appreciated.
That’s algorithmically interesting.

Hi there,
Did you consider using ofNode? maybe you could use that to apply transformations to branches. Each ofNode could draw an ofPolyline.

These days there is somebody interested on a similar topic:

Creating tree structures and tying them to ofMesh beginners

I am working on a series of branch/capillary form tools, and for that I’ve been working with a simple recursive method and I love the way it is looking so far. With that said, I am not working with an easily traversable tree structure; I can’t simulate something moving through each branch, then child branch independently. My current structure is a series of ofMesh objects in a vector< vector<ofMesh> >. Which is also represented as: branches[level][branch_ind].getVertices()[node_ind] So, each…

Hi @Jordi and many thanks for your answer.

I’d store all ofNode in a vector and that vector itself would be drawn to as the main branch… But I don’t want any branch to be the main one.

I’d have a kind of mega class containing and handling a set of polylines.
wow. it makes sense.
maybe I don’t feel ok with ofNode, but that would help.

I gave an answer to the forum post jordi posts above in this github issue: https://github.com/openframeworks/openFrameworks/issues/5428

@julienbayle what you post is pretty much a tree data structure with the particularity that you need the pct at which the child starts. I would use something like:

then if you want to use ofNode to represent the transformations you can add it to the Branch class and parent every child to it’s parent using ofNode::setParent

@gluon what you post is pretty much a tree data structure with the particularity that you need the pct at which the child starts. I would use something like:

then if you want to use ofNode to represent the transformations you can add it to the Branch class and parent every child to it’s parent using ofNode::setParent

Thanks @arturo.
Actually, I think that’s exactly the way I need.
A branch would have children that would also be branches themselves, are we agree?
Basically, I’m seeking how to implement it. It seems very simple but I have to figure it out.

The idea is: each branch has to be a polyline (or path?) because I need to be able to draw it progressively.
For instance, at the beginning I have only one branch. at some point, branching occur. So if I want to keep the percent, I probably need to precalculate each branch’s dots and to draw them progressively using a polyline to which I add progressively vertices from the branch’s dots… the whole into a branch class…

A branch would have children that would also be branches themselves, are we agree?

@arturo, thanks again.
I think I got the vbo thing.
Now, I’m just trying to generate randomly (just for testing) some children (in the code, n is the maximum number of branches as I feel/guess that infinite depth problem as in recursive code…)
That’s give me an error.

How could I create new children ? Should I do it “outside” of the class in my main or my super class ?

It gives some debug stops with auto pct = ofClamp(this->pct, 0, 1); etc.
Seems something occurs bad with pct.

okay.
my problem is how to allocate a new Branch to the Child pointer…
confused.

@arturo, would you help me one more time about how to allocate a new branch ?
I mean, where and how I can create a new branch in my code ?
that shared ptr thing blurs me.

You should create children only once in setup and also set a limit where children stop being created, i would create a second setup method, a private one, that takes a level parameter, once that level is greater than some value you stop creating new children.

if (children.size() < 3 was intended to do that but I think my problem is the creation itself. how can I, basically, do that properly ? I’m still confused with the part.

To create them in setup:

Thanks @arturo
Almost there.
I created a Branch method kill() that clear all of I want to reset the whole stuff.
BUT, I have all children starting at the pct = 0.
weird.

Ok.
I think I understood.
Actually, if I store pct “only”, that’s not enough.
I have to store the new coordinates (origin of each branch) too. By store, I mean… to use it in setup which means that maybe I cannot do this that way… Not sure. 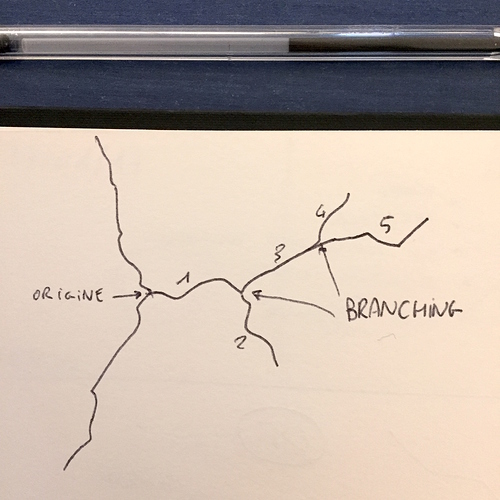 Maybe, I have to do that using another way.
That wouldn’t be that efficient but maybe… using different class and not using the shared_ptr.

My main ‘problem’ is : I’d like to specify the code to do only one cracking without branching, many with branching etc… I’d need to code a control layer changing the behavior of the whole system.
I should hire you on that project

you can pass any information you need in setup or the constructor when you create the child, also you can avoid having to pass the origin if you use ofNode and just parent every child to it’s parent when creating it. that way the children don’t need to know their absolute position only start in 0,0 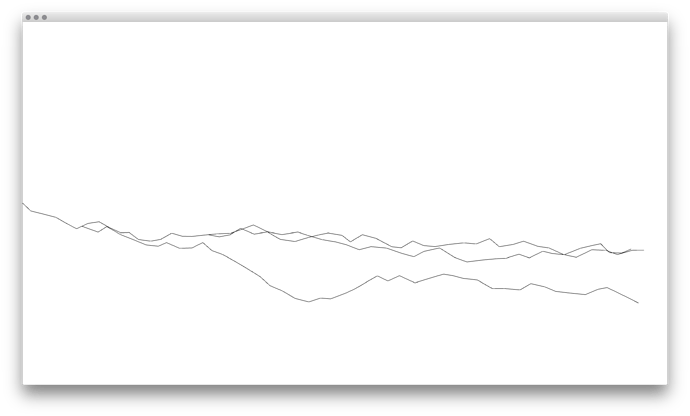 Still a small remaining problem: clearing the branch system.
If I clear the polyline vector, it doesn’t seem to be enough.
I run the code. It draws. At some point I want to reset it so I reset the master pct value then I clear polyline and I re-setup the whole. Weirdly, It is “as if” the system was keeping things in memory… I have some branches already drawn and static etc.

I have a “candid” kill() function:

And It doesn’t seem to be enough.