Hello all,
Does anyone know of a clever way to wirelessly stream video from an iphone’s camera into openframeworks?

I recall some funny home-made app from a couple of years ago that did this, but can’t find it…

Hi,
4 years ago I used the mobiola web camera application to do this. Wifi connection between an iphone and a PC. It worked quite well, I used it about 20 times for a theater show with no problem. The video was just 480x360, the framerate was just correct. Higher resolution was possible but with too many lags. Perhaps this can be better with modern hardware ?
This was an app to install on the phone, and another one to install on the computer. When both the apps were running, from the OF point of view the camera was just another ofVideoGrabber, with nothing special to configure.

[edit] Don’t know if this is clever

Thanks for your hint lilive.

Here is the run-down:

* Mobiola WebCamera ($2): streams to the “MobiolaWebCamera” app fine, but the drivers seem faulty so other applications (e.g. skype, photo booth, ofx) only see a black from (see image below) 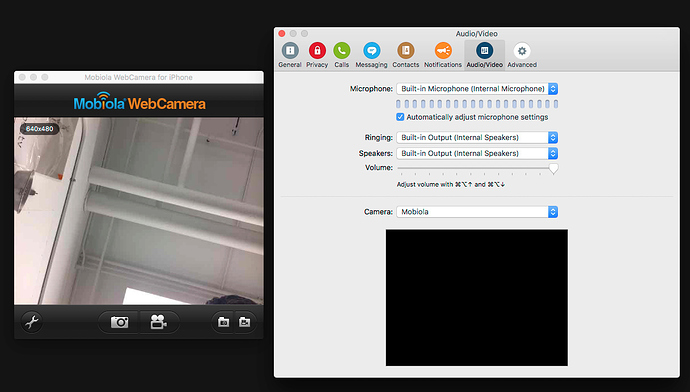 Anything else to try?

then you receive with this http://techlife.sg/TCPSyphon/
from which you could ingest into OF via Syphon.

Mobiola WebCamera ($2): streams to the “MobiolaWebCamera” app fine, but the drivers seem faulty so other applications (e.g. skype, photo booth, ofx) only see a black from (see image below)

I don’t remember exactly what I was doing back then, so I’m not sure about that, but maybe there is a way to have the acquisition service running without displaying the video in the computer app? Perhaps just close the computer app when the connection seems OK, then launch another app which use the video, like skype or your OF app? I say this because with my actual PC, I can’t have the same webcam used by 2 apps at the same time.

But if you’re looking for a Mac OS solution, I guess the roymacdonald answer is the one to follow

I use a slightly different solution, for a few reasons. I use an apple TV and capture the HDMI of the apple TV with an HDMI capture box. This allows me to make OF apps for IOS with a second screen and an interface for actors, or download clean camera apps to stream. The streaming from the iphone to the apple TV is great quality and low latency and the overhead of decoding the network stream is gone from the computer. I have use this is a few shows and find it to be a great solid workflow.

Thanks everyone, these are great suggestions.

@roymacdonald just tried your suggestion and it works very well; I tried with one iPhone6 and one iPhone5 on a good 2.4GHz 802.11n network; framerates start to drop, especially for the iphone5. Have you pushed this set up for video from multiple sources?

@fresla love that idea; can you get multiple video streams in some how or is it one iphone-apple-tv pair for each phone?

@batchku “can you get multiple video streams” kind of, each iphone that tries to connect the apple TV will kick the last one off. I use one Apple TV per phone and multiple capture cards (you can even segment the wifi network so each phone only sees one apple TV). Again, you need a really good wifi system to make it work, 5ghz has more bandwidth (go ethernet to the computer and to the apple TV). Look for rukus or other industrial wifi setups to make this reliable.

This tool has been discontinued.

How can i get it? its any other alternative?

I would use NDI and a very good wifi network. I am about to do the same and noticed the latest NDI SDK (which is ahead of the ofxNDI addons right now) does more efficient streaming and works well over wifi.

Hello! I would like to revive this post, as I could compile the ios sender a year ago with the help of ofxNDI, but now the same project it is giving me errors and doesn’t compile.

I tried and download the latest NDI sdk and installed it. After it did not work, i tried to replace the includes from the sdk to the ones in the ofxNDI addon, but it is still not compiling, and the errors are the following:

Any help would be App-reciated