Stitching many cameras together for ofxOpenCv blob analysis

Hello oF-Forum
I have some more questions. I want to do a webcam stitching application using 2 or 3 webcams. I think I can get all the webcams working together and do all the stiching inside an FBO in openGL. What I don’t know how to do is capture the usable portion of the resulting frame and send it to ofxopenCV in order to do blob detection.
I’m guessing the steps are:
1.- Capture webcam frames.
2.- Draw frames onto a FBO and warp them.
3.- Capture the resulting usable portion of the frame into another texture or something. (Need help 1)
4.- Send the new texture to ofxOpenCv. (Need help 2)

I’ve attached an image of what I wish to accomplish and I will upload the source when I have anything usefull.
I would also like to ask for the technical concepts and requirements for this, for example… do all webcams need to be the same? Why? (This because I wish to learn

I also recently bought a couple of point grey cameras but I would like to try this application using very cheap webcams. Also, for personal reasons I wish to do this using nothing more than openF v0.07

(Image copyright… definitely NOT mine, just found on google) 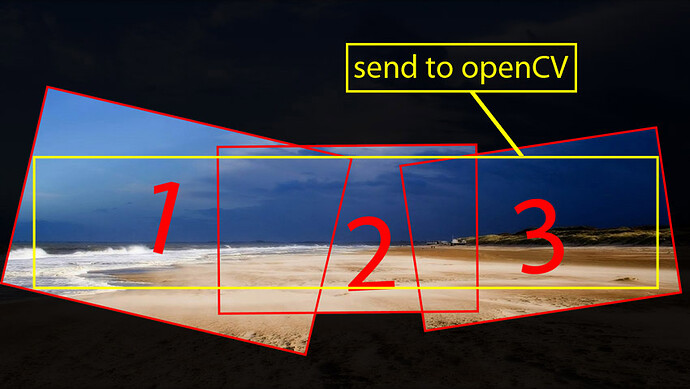 Rough code… I’m sure OpenCV has it’s own method for this, it always does.

Assumes you have a combinedFBO filled with your tilted and morphed webcam images.

It seems promising memphistechno. Thanks!

I do have a question regarding the method. In the single camera “opencvExample” there is mention of a bool that checks if the actual frame is a new frame:

I’m guessing that even if two webcams are the same, they won’t necessarily stream frames at the exact same rate.
Does one have to deal with these types of sync problems?.
=D
I’ll try your method tomorrow… I’m gonna go buy some webcams!

I think that method exists to make sure your 900fps program doesn’t try to process your 30fps webcam stream at 900fps. I don’t think camera sync is going to be an issue in this program, I’d let it run and see what happens.

The only webcam class camera I have seen to give a predictable sync is the playstationEye. Which according to structured light demos, can provide a reliable 60fps.

Also I would investigate masking in OpenCV. All of my uses for it are specific and limited, but I have come across numerous fast masking and cropping methods specifically implemented in openCV for openCV

Sure, I will check all that you have mentioned. Thank you

Everything seems to be working with two cameras but I have three identical Microsoft LifeCam HD-5000. I bought them to experiment with this and see where it might fail. I’ve tested them but I don’t know what to make out of this. I also tried connecting the webcams to a usb powered hub and directly to my computer. I also swithed them many times and discarded any hardware failures.

The problem is here in device 2. As you can see it starts using it but exits inmediatly. It fails on “ERROR: Could not start graph”

Triple checked with AMCAP. Updated firmwares on all the webcams and updated the lifecam software. Independently they work great. Using two I have no problem. I cannot get three working as I mentioned.

it would be really cool to see this applied to images from multiples cameras :
http://blog.inspirit.ru/?p=343

I’m not sure what you mean paranoio.
I’ve attached a screencapture of my progress. The sunglasses are for debugging purposes of course.

This is realtime, coming from 3 cameras connected to 1 computer, the warping is done using the mouse.
I still have that problem with the third camera but everything else is working.

This part doesn’t work for me, I have to use an openCV ofxCvColorImage, not an ofImage.
Any thoughts?

@irregular
have you solved this?
you can use the ofxCvColorImage::setFromPixels(const unsigned char * _pixels, int w, int h )
then you must call ofxCvColorImage::flagImageChanged() which updates the iplimage data inside ofxCvColorImage.
if you don’t call the latter method any opencv function you call might not work.

Any luck with getting the 3 cameras to work?

@Roy
Yes I did solve this. I used a intermediate ofPixels like:

I think it is not very efficient so I will try the method you mention.

About the cameras, I moved that question here:
http://forum.openframeworks.cc/t/many-usb-cameras-at-the-same-time-in-one-application/8179/0

oh! yes that would be awesome! xD

I’d say it is working

so now you can create a 360 installation ?

I don’t have much experience but I think Step 2 would envolve mapping the cameras onto a 3D cylinder. I also guess you could make a spherical video like the ones posted on the internet.

i guess its not a cilinder, just by creating panoramic video frames then using a
special player in client side to allow users watch and turn around bt moving the video.

i am also trying the same thing. i am able to run the cameras simultaneously.
can you please share the code of combining multiple input streams.