Hey, I’ve been using 0061 on Ubuntu 9.10 for a while, everything has been great. However sometime last week there were new versions of both codeblocks (8.02svn6261) and wx (2.8.11.0-0). I usually ignore updates to these packages to avoid problems like this, but I figured it is summer and I can finally upgrade my system.

Now I’m getting the good old runtime error when I try to start codeblocks:

Is anyone using the aforementioned package versions without any problems? I even tried removing everything, including the repositories and re-running the install_codeblocks.sh script. No luck!

Okay, so maybe I just didn’t try hard enough in synaptic, I never use it anyway. I found out that I can force install from the command line using apt-get like this:

Codeblocks is back to its old self now, I guess the new version isn’t stable. Hopefully someone else who has this problem can fix it this way too!

When you go to synaptic and look at the codeblocks package, right click and go to properties ->versions tab, what versions are available to you?

Here is what I see:
[attachment=0:1c8nrdwj]codeblocksversions.png[/attachment:1c8nrdwj] 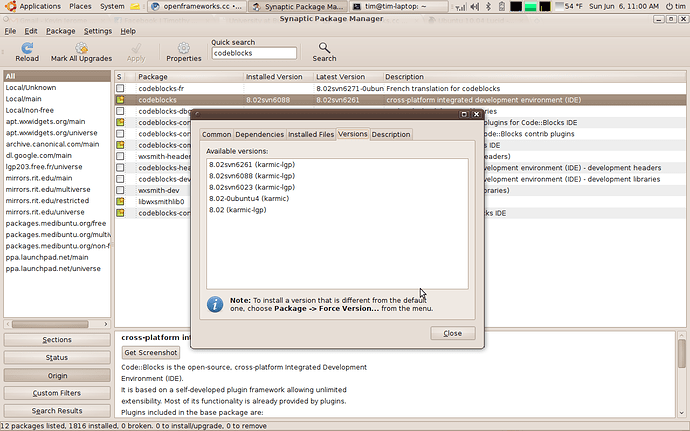 however, the top one is the one with the wxwidgets problem

So if you open a terminal and paste this in:

it doesnt work? I just tried this on a fresh install that had the same problem a few days ago, it worked fine.

Doesn’t work for me

This is the read out I get .

oh, okay. it looks like for you you’ll want to add the ‘-0~karmic’ to the end, just like the version from synaptic tells you. so try this:

I’m not sure why yours is named differently

alas no … still the same message

I actually just upgraded to Ubuntu 10.4 on my 2nd machine and OF is working great there so now I’m going to do it with my other one instead of continuing to battle against this.

but thanks for your help

Another way to get this working is to remove the wxwidgets repository completely and use the ubuntu version. then you can upgrade to the latest svn of codeblocks. I have it working on 9.10 and 10.04