gives me the error :

Base class has incomplete type

What am i doing wrong ?

you need to include the header in order to be able to extend, forward declaration like you are doing there with:

Thanks for the answer. So should i use instead :

By the way, i am now having an error when declaring this ROI class.

in my kinectTracker.h i am declaring :

then i have the error :

Thanks for your suggestions

Ok so i figured out that ofBaseDraws is part of ofBaseTypes and includes 4 pure virtual methods. I thought i could implement them in const but it turns out it can’t !

in my ROI class and everything seems ok now. 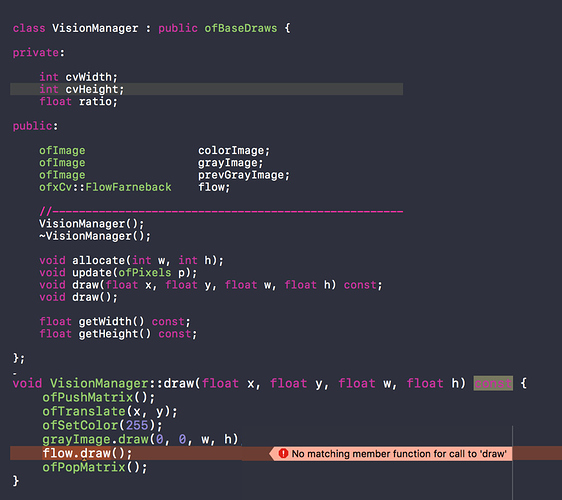 I was getting this error then adding the const to the virtual function solved it. Now I am getting the weirdest error, I can not call functions on the flow object all the classes are hidden?

With the help of @NickHardeman if you make the object a pointer it worked ---- but why?