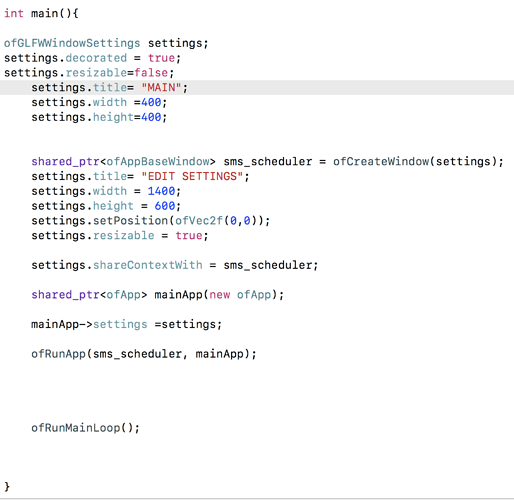 will this implementation be problematic?

its seems to be behaving nicely…

can be called as many times without leaking or having other weird behavior right?

I’m very interested by this.
I’m trying to get different windows poping up depending on the amount of glfwGetMonitors detected.

I don’t have an answer, but I’d figured I would post here since it’s related to your topic…

I tried replicating your code, but I’m missing stuff:

How do you create a settings_menu_sms_schedule ?
Is it extending a ofAppBaseWindow or ofBaseApp or something else?

How come you don’t have to use shareContextWith as described here, to share the components?

Sorry if this is a bit confusing, it’s a bit opaque for me…

Hi, that is just an extern bool
I call it as true when the window is running and false from the exit or the destructor of the second window

By the way I am sharing context:

I do it from the main function:

I mean there are many ways to do this, in this example I went with the most simple and straight forward way.

1)I declare the second ofApp class UNDER the first of App.

Notice that I also have a “ofGLFWWindowSettings” thingie over there

This is becaue in main() I want to pass pointers of those two things so I can then pass them to the second window.

when I close the first window I close the second window as well if it’s open
via calling setWindowShouldClose(); in ofApp::exit():

settings_menu_sms_schedule_is_open is just an extern bool, I call it false when window is not open and true if it is, most people hate extern bools. you might use a shared pointer etc…

Yes this is more clear, thanks for explaining.