Setting up OpenFrameworks with Android Studio

I’m in the process of setting up my system to deploy OpenFrameworks apps on Android devices.

However, whenever I open one of the OF - Android example projects, I keep getting the following error:

Anything I’m missing or doing wrong?

Did you do this step?

Here’s a screenshot of my paths.make file:

okey then maybe use this
https://github.com/openframeworks/openFrameworks/pull/5461

Hmm, I just pulled from the Master branch of OF to make sure I have those updates; but I’m still having the same issue

Clearly, I’m misunderstanding something in the instructions, or in the overall process…

I had also lot’s of troubles setting the whole thing up.
The pull request is still not merged so you need to check out the specific pull request.

Next thing to do is to follow the new docs included in the pull request:

I see - that makes sense, thank you so much!

Last question (I think) - what directory should I run the
scripts/android/download_libs.sh
command in?

Weird - when I do that I get this:

and
-bash: cd: openFrameworks/scripts/android: No such file or directory 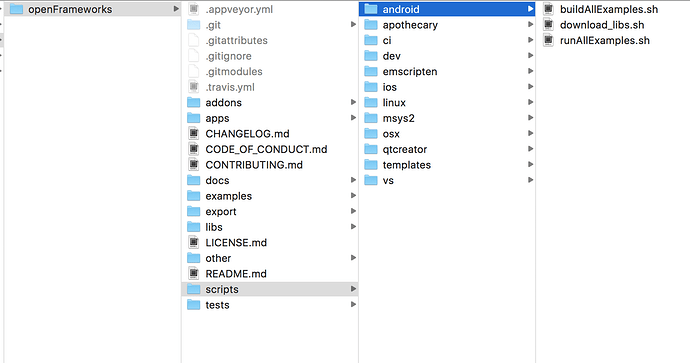 cd means change directory. you have to change in the directory where your openframeworks lies.
with ls - list directory you can see where you are.

So cd (change directory) to your openframeworks folder, change to scripts/android and then run ./download_libs.sh

I don’t have a mac, but maybe you can just click on the download_libs.sh

I am currently trying to set up Open Frameworks 0.10.0 for Android Studio, and ended up here trying to figure out what it means that I don’t have a paths.make file at the location indicated in the instructions on the web page at https://openframeworks.cc/setup/android-studio/ . I gather from this thread that there are new steps and that 0.10.0 doesn’t have such a file to edit, but that the web page has not yet been updated to remove that instruction?

(Is there someone to report suggested web page & doc improvements to?)

you can open an issue in github at https://github.com/openframeworks/ofSite or even send a correction of that specific page by opening a PR request with the changes

Thanks! I submitted a PR with the main needed changes and a couple suggestions.