I’m working on a modern spin of the Atari Video Music (https://en.wikipedia.org/wiki/Atari_Video_Music) that will be a raspberry pi powered real-time audio-visualizer device that will generate imagery from a bluetooth connected audio source.

I’m getting hung up on reading the audio source because it doesn’t seem that you can monitor the system output. This thread mentions jack, but I’m not sure how that would work. (How to listen and visualize a realtime audio stream ?)

Anyone have any thoughts on how to get this working?

as first thing you should get jack up and running, it should be good to start testing with qjackctl, it gives you a gui for starting/stopping/configuring the jack server and route things (getting the system input to oF should be easier than routing the system output back again as input)

I’ve been playing around with qjackctl, but the oF app doesn’t show up as a writeable client.

It turns out I don’t need to monitor the system output, since my device will ultimately be Bluetooth only, I can just monitor the A2DP input! 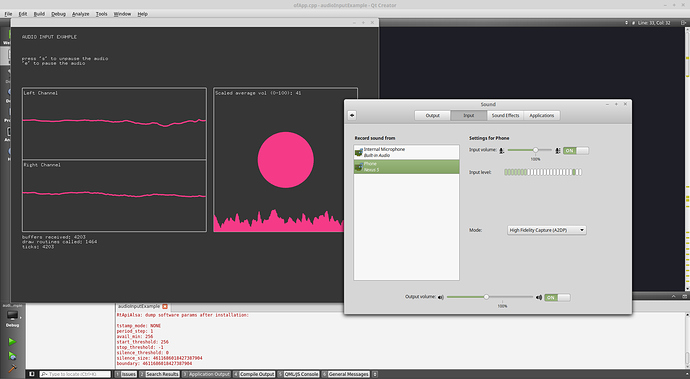 Trying to implement this with ofxFft, ofxBeat or some kind of audio analysis add on, but I cannot get them to read from the bluetooth device. They are all insisting on using the built in microphone, which doesn’t make sense because it is working fine with the standard sound stream input example. Back to square one.