Raspberry pi and grayScott shader with 0.9

I’m trying to run GrayScott Shader in rpi with 0.9.

First I tried the ofxFX addon, but Ican’t make it working in rpi with 0.9, then I tried to simplify the GrayScott code example.

But I feel I’ve made some mistakes with the ping-pong pattern or passing textures to the shader, I understand the tex0 in the shader is used to modify the simulation state, but I can’t make it work.

I’ve created a github repo with two examples, a simple shader working, and the grayscott that is not working. 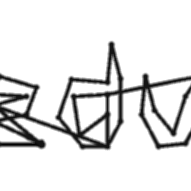