QT Creator: ofPoint and ofImage does not name a type

I’m having an issue after following a code tutorial, with a few of the things used (ofImage and ofPoint)

The project errors out and states that ofImage and ofPoint do not name a type, but this is how they were coded in the tutorial. Any help on what I did wrong?
This is in the Player.h file. Should it be in Player.cpp? 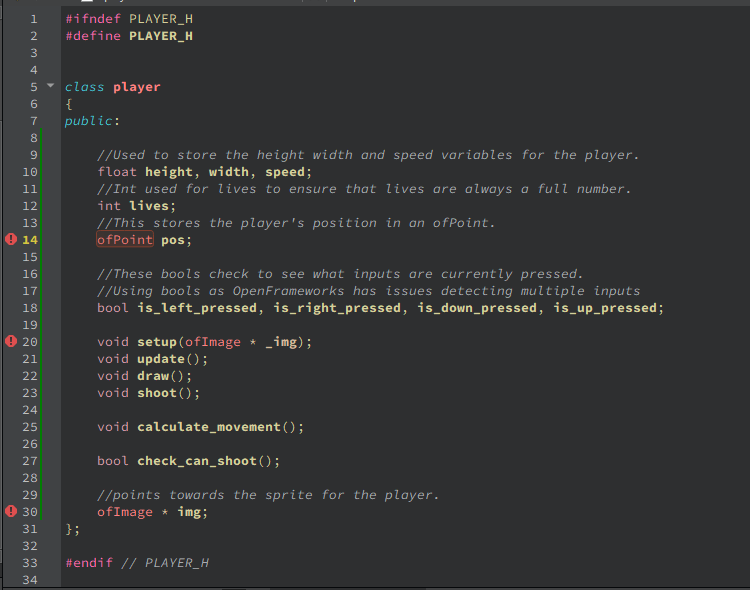 It is just missing the OF include file.

Ok, it seemed to have no effect before, but now that error is gone. However I am now left with a fresh error

Which points me to my player.cpp file (pasted below)

Hi @Chubbulus , this is a constructor for class player. It doesn’t look like you declared it in player.h. If player::player() is going to remain an empty function, you can just omit it from your player.cpp file. The compiler will supply a default constructor when one is not defined. Sometimes including an empty constructor like this can cause some issues, so I find its better to omit them if they’re empty functions.

I figured out what the issue was. The guide I was following completley misses adding anything to player.cpp which led to the issue. After digging through some other code and with some help from another forum user, I figured out how the CPP files are supposed to work and the issue was that the functions had nothing defined within player.cpp, as the guide missed that file completley

Hey sure and glad you have it working. I learned a ton from this chapter of ofBook when I was learning c++ and OF. It’s a big one! It covers some really fun things (like OSC), and it’s a larger project with lots of classes and more complexity.

So have fun and just post again in the forum if you have other questions as you go along.