Project tracker position back to screen fixing the distortion

Hi everyone! I am glad to be a part of OpenFrameworks community, hopefully outside the beginner forum soon.

I am working on a multimedia project where IR tracker position is scanned with a camera and projected back to the same screen with a projector.

The problem I face at the moment is that tracker position taken by camera have to be calibrated to fit the projection size and position. I was planning to use simple a map (horizontal and vertical) function to map tracked coordinates to screen coordinates, but this will give a good result only when a camera is located right in front of the screen.

When a camera is in offset horizontally or vertically - the tracker position will be a trapezoid (where ab != cd on camera tracked position I), but probably even worse where none of the sides are equal.

There is a warpPerspective in OpenCV, which does similar operation to an image, so I need the same, but just to map the coordinates. There is probably an easy solution for this, I just don’t know how to correctly search for it 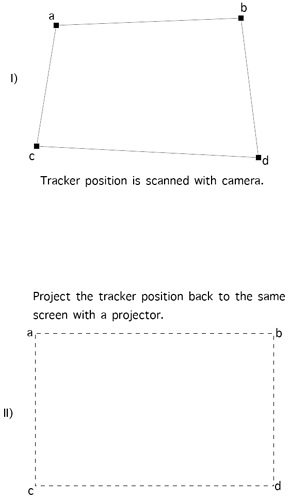 Well neverming. I think it’s called “quad warping”. Since I cannot delete the thread, I will post a solution that worked for me. Currently reading this thread:

I’m not looking at mylar and weeks, and I really don’t have my head around matrix math, but I don’t think the code there gets you a matrix, just how to translate from one x,y position to another given the transform (ie, bilinear or perspective based transform). to get the matrix you need, you might look at ripping out the code from opencv – I think look at cvGetPerspectiveTransform + cvSolve (which is called in cvGetPerspectiveTransform)… or, just use opencv to get the matrix

ofxQuadWarp can also do quad warping with points, check out the example.

Kj1: thanks a lot, this looks like the thing i was looking for. But as soon as you find the solution - you try to make it better, so I started to look for no OpenCV solution and luckily found it here:
Quad warping / homography without opencv (the source example by davidchatting).

I still don’t understand how everything works with matrixes but this example works exactly as i expected!

Great addon, cloned it for my future projects