Problems of using OF in visual studio 2015

I am new here. I got some problems of using OF in visual studio.

Are there any solution?

have you kept the whole OF folder (libs, examples, etc) together since you’ve downloaded? It’s complaining that it can’t find a file which feels like something got moved around. Can you try re-downloading a new OF from the downloads page and keep everything together in the folder?

Oh!! Thank you very much! I got something wrong when I unzip the official package. Now I figure out the second problem. Do you have any idea for the first problem? It always shows the window like this when I create a new project. 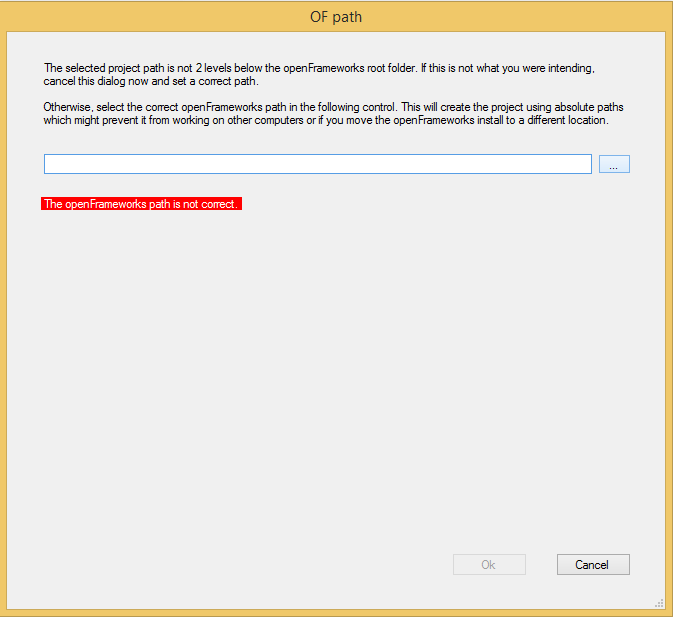 when using the plugin you have to create projects inside apps/somefolder that’s 2 levels below the OF root. Or, if you want to create a project somewhere else, in that screen specify the place where OF is installed by pointing it to the OF root folder, i think in your case c:\of_v0.9.3_vs_realease

yes that should work, sometimes the visual studio dialog is slightly confusing, you have to disable the checkbox to create an additional subdirectory for the solution in the first screen. in any case if you set the correct OF path it should work without problem no matter where you put the project.

Hi. I was trying to build the Watershed Footfall project in Visual Studio, but I was coming up short. This is because earlier I was getting the LINK1104 error
cannot open ;.obj.

First I changed the %3b to SEMICOLON SPACE in the Properties of the General/Linker in the Visual Studio project.

then , the error LNK .obj not found error has gone, but a new error LNK1104 src.obj NOT FOUND error has come

Now, after cleaning the solution and deleting the OBJ folder in the app and recompiling again
I deleted the obj folder. This was in c:\OF\APPS\MYAPPS\FOOTFALL\

Rebuilding the solution gave me this error as below :
LNK1104 cannot open file ‘C:\of_v0.9.8_vs_release\addons\ofxOpenCv\src.obj’

And I tend to agree with what VS2015 is saying.
Because I really do not have that file in my c:\OF\addons\oFxOpenCV folder.

How do I get this file in this folder and then remove the error? 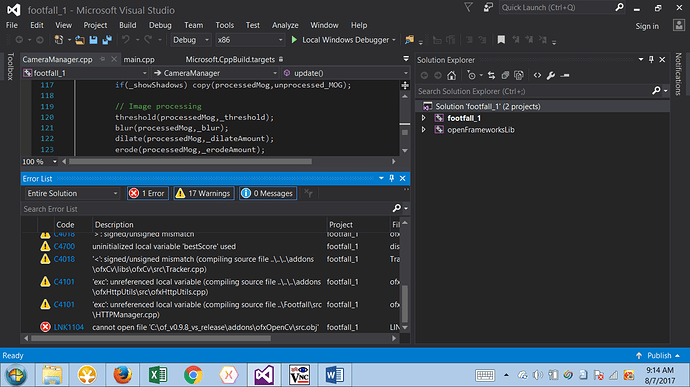 I have the same problem. I downloaded the 9.8 release, extracted it to C:\of_v0.9.8_vs_release and installed the plugin in VS2015. However, when I try to open a solution that is saved in my Dropbox folder, it cannot load the solution. When creating new projects, everything works. My colleague can open the project without problems.

You’ll have to move the solution folder from your Dropbox to the myApps folder (or two folders below where oF is) for it to compile.

I have both tried to copy the solution folder to C:\Users\Noud\Documents\Visual Studio 2015\Projects

EDIT: Tried to create a new empty OF project. This compiled without trouble, of course, but when I copied the Dropbox project folder to the VS project folder, it still didnt load. While the new OF project does load. Now, then the project I want to open is ‘corrupt’ or something, you could say, but others can open the project without a problem.

Tried C:\of_v0.9.8_vs_release\apps\myapps? It needs to be two levels below the main OF directory.