ofxPoco not working with nightly builds

I want to catch up to a current OF version so am doing some tests with the nightly builds. It seems there is something up with IOS and poco. A new project from the project generator, using ofxPoco no code andand no new code throws this error:

Any ideas on how to fix it?

What is your build system? Seems like the error is from code editor. If so, you can add include directories to fix.

It’s for iOS so I just used Xcode and the project generator and didn’t change any code.

Going back to the problem, project generator modifies Xcode file so header including could be missing.

What you need to do is just including required header manually.

I just tested this version of iOS nightly builds and it worked without problems !!
Please try to re-download and create new project with projectGenerator.

Hey @fresla! I tested just now and can confirm the error (m1; Ventura 13.0.1; Xcode 14.1). I downloaded the nightly from 20221214 and created a new, empty project from the project generator with the ofxPoco addon. I didn’t plug in a device, but selected My Mac(Designed for iPad). After removing the addon and updating the project (no addons), it compiles fine.

I see the issue too.
I think it might be an issue with the projectGenerator and the iOS template as the libs include paths for the ofxPoco addon aren’t being added to the Header Search Path field.

@fresla this fixed it for me.

To: Header Search Paths fields in either Project or Targets: 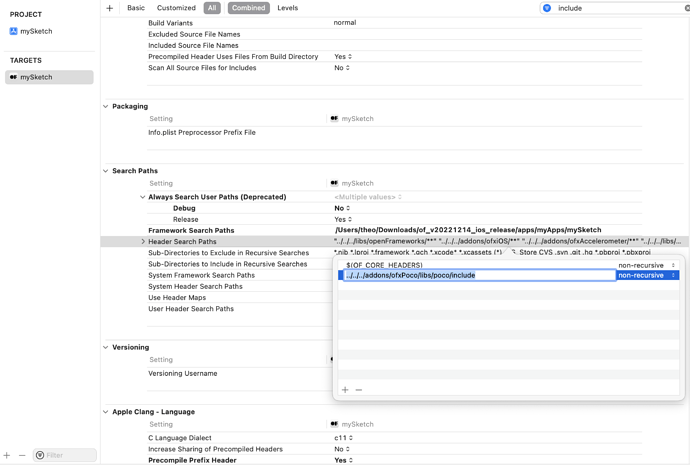 ping @dimitre incase this is related to the recent Xcode template changes for PG.

I see that the openCV example has the same issue.

Thanks for pointing it out.
I’ve submit two PRs, already merged now, one for openFrameworks and other for projectGenerator that hopefully fixes everything.

With a new PR on projectGenerator it will address the issue mentioned in the for…um here https://forum.openframeworks.cc/t/ofxpoco-not-working-with-nightly-builds/40916 to be merged together with this https://github.com/openframeworks/projectGenerator/pull/315

to fix the issue mentioned here https://forum.openframeworks.cc/t/ofxpoco-not-w…orking-with-nightly-builds/40916 to be merged together with this https://github.com/openframeworks/openFrameworks/pull/7252

You can pull both projects and recompile project generator to test, or wait for tomorrow nightly builds.

Great, thanks for the fast fix.