Hello, I get tons of errors when compiling example ofxKinectV2 project on Windows 10. Is there a way to clear them, or should I stop trying using Kinect with OF? :(( thank you for any advice (The debug Win32 has even more errors!)

So the error you’re getting (Cannot open xxx) is the way of visual studio to tell you your project is not set up properly. You have to do two things: tell VS where to find this files and their dependencies (right click on kinect222 and in the properties you’ll have an “include folders” where you tell VS where are the .h and .cpp files for your addons, and if your addon also have .lib files (libraries, which are precompiled code) you’ll have to tell the linker which folder to look for (library folder or something) and also specify the name of the libraries (bla.lib).

The easiest path forward is to either find a working example solution for the specific version of visual studio you’re using, or try to use the project generator to make one. A quirk of visual studio is that you need the same version; if your example file is for visual studio 2012 and you’re using 2013 it has a high likelihood of not working.

I’m not sure if it’s really maintained; but you could have a look at joshuanoble ofxKinectV2 (which has nothing to do with the ofxKinectV2 you’re using; but was meant to work on windows)

There’s also https://github.com/elliotwoods/ofxKinectForWindows2 which seems to be better maintained, requires VS 2015.

Thank you for both advices. After following instructions on https://github.com/elliotwoods/ofxKinectForWindows2 I now get just two errors: see the image.

The question is: I have xbox1 (not 2). Will Kinect SDK 1.8 work with ofxKinectForWindows2 library? Yesterday night I thought I had XBox2 because the output for default kinect OF library was totally blank with error (No device found). 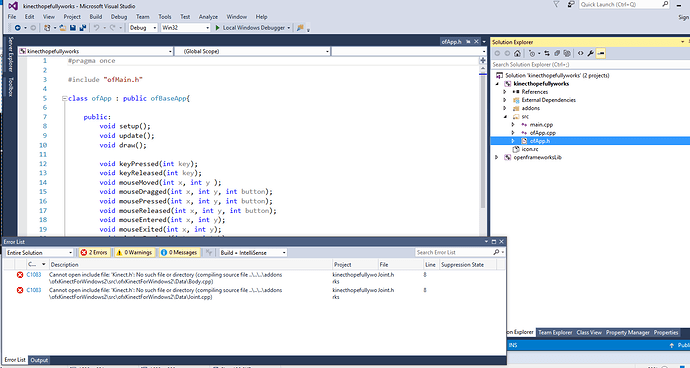 If you don’t need skeleton tracking you should use the ofxKinect addon that ships with oF (example there:openFrameworks/examples/computer_vision/kinectExample/)

If you need skeleton tracking, you may have to dust off an old version of openframeworks and try this addon: https://github.com/joshuajnoble/ofxKinectCommonBridge (there might be other out there that are more recent though)

something that is worth celebrating - the kinect now works. However the 2 other screens are pitch black

please see attached. I am using the default ofxKinect addon and example and debugging as x64. I installed Kinect SDK 2.0 for XBox 1. 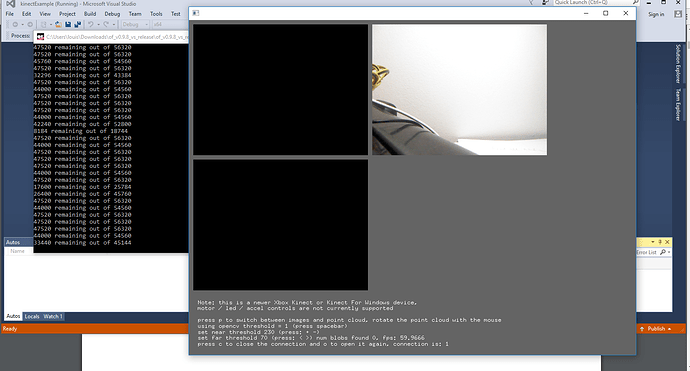 ofxKinect doesn’t use the kinect for windows sdk (yeah that’s non intuitive but basically people reverse engineered the communication protocol and made their own driver, so that the kinect would also work on mac and linux). You should follow the instruction there:
https://github.com/openframeworks/openFrameworks/tree/master/addons/ofxKinect to make sure you have the right drivers installed.

I assume your kinect is this one: http://circuitfreak.net/wp-content/uploads/2015/07/Xbox-360-Kinect-Standalone.png (as opposed to the kinect v2 for the xbox one that is more rectangular)

The example is going to take a slice of the depth data and look for blob in it, so to make sure you actually see something you need to have stuff within that slice (so if in doubt you can just use the camera to swipe the room and you’ll probably pick up a table or the floor or something…)

Hang in there, you’re almost done!

Havens on Earth - it is working after a 72-hour battle. Thank you all so much for the help. The OF community is the best