ofxGuiPlus integration in of v0.10

I know that the next OF release will include most of the features of ofxGuiPlus. That’s great! The standard gui will be really useful and complete.

Right now, I can’t add a ofxSliderPlus to ofParamtersGroup. So it’s not immediate to switch my old code from ofxGui to ofxGuiPlus. On the other side, the ofxGui addon in the nightly build doesn’t seem to include features like keyboard input and fine controls…

I’m going to start two long term projects and I would lie to do the jump to ofxGuiPlus and give back my feedback to the community.

So, which are the plans for this addon? What really I’ll found in the 0.10 version?

Thanks Arturo!! That’s great. What about add a description pop for any ofParameter?

As many other OF coders, I made several projects in the past years and I collected hundreds of widgets. So, it’s hard now to remember what they are for. Until ofXUI was not deprecated it was quite simple to add the widget description pop up, but on ofxGui it looks more complicate and I’m not a super programmer…

Hi Paolo,
I wrote ofxGuiPlus, I stopped using it some weeks ago when the parameter keyboard input was added to the core ofxGui.
(btw, ofxGui now has a super nice color selector also).
The one handy thing that I has, that the ofxGui has not is being able to change slider values using the arrow keys.
I haven’t looked at ofxGuiPlus code for a while and I see no problem updating it to 0.10 but I think (and hope) that it´s features will eventually become part of the OF core.
Anyways, I would be happy to get some feedback.
Best regards

The ability to change values using arrow keys is very useful, but if I can give all my suggestions, there are two other features that could improve the usability of ofGUI.

It could be better if you could arrange ofParameterGroup elements on different columns (A) or even better having a left panel with the names of the groups and a right panel with the current selected group maximized (B).

Hi Paolo,
Thanks for the feedback!
The parameter description would be great. I actually got in a situation last week where it would have been super useful!
As of the arangement issue, have you seen ofxGuiExtended? It has a ton of features and I’m almost sure that there are
some options for arranging.

I’m not really sure what it is keeping a lot of these improvements out of the core ofxGui. @arturo are there any plans on further
improving ofxGui? If so where should I check in order to help?
cheers!

I just implemented a really draft extension of ofxGui that allows pop-up descriptions for both ofParameters and ofParametersGroup. it works with float, int and bool ofParameters and automatically split the description on multiple lines. So you can write as much as you need. Finally it writes a formatted markdown file with all descriptions created. I don’t know if this can be a new Addon, but I will soon post the code with a simple example, so you can think about. 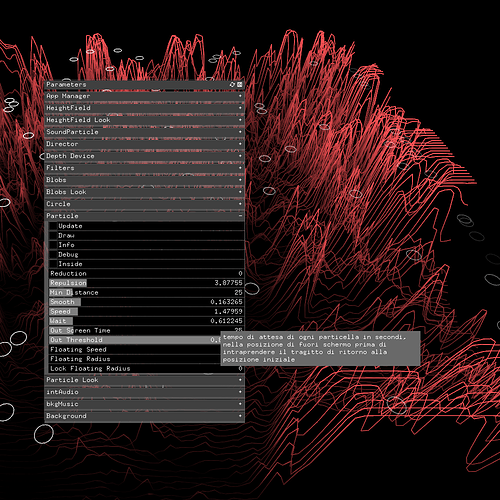 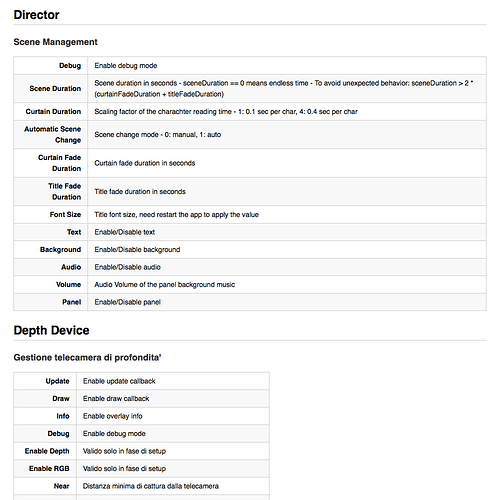 That looks great. Have you shared this anywhere?
best

I’ll do it this weekend, I still have to add a little bit of documentation and a simple example, to make you understand if this code can become an addon

I also think ofxGuiExtended and its sister addons (ofxSortableList & ofxMasterSlaveControl ) have some cool features and it would be great if they could be part of ofxGui. I think that was initially the plan @frauzufall?

Here is the code, it’s super simple but it’s able to create tooltips and write the help file in the md format.

For Roy: I have written few comments to show where the code should be better integrated with ofxGui. Feel free to contact me for any question.

HEy @Paolo, thanks. I’ll take a look at it and come back with comments.
Cheers!

Hey @clem, sorry for unintentionally ignoring your question. Yes, the initial plan of ofxGuiExtended was to develop ofxGui further and we got far, but at one point I ran into issues with the layout development and other things that I could not fix and got no other feedback, so I decided to base ofxGuiExtended on ofxDOM to separate the layout from the gui. With this step the issues vanished and I am even able to add other things than the gui to the layout, but it also got more complex. @arturo didn’t want to bloat it up like this and I completely understand that. My flexbox-like layout implementation is also far from perfect. But I had to abandon ofxGui and kept working with ofxGuiExtended because my OF projects have complex layouts where I need all that functionality, here is a shot of my biggest personal project: 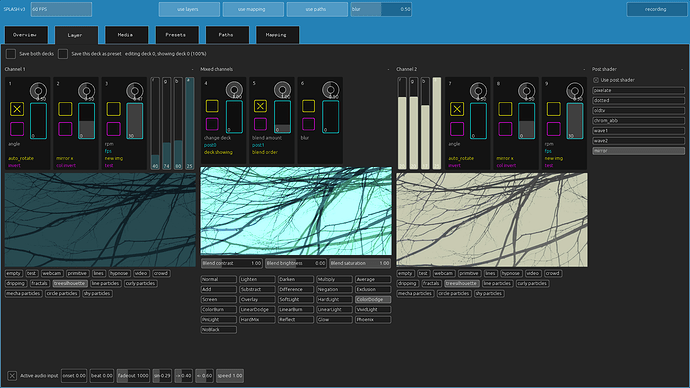 I am still trying to provide minimal methods to create simple interfaces like a one-liner panel or menu, but the addon source code probably won’t shrink.

Hey @frauzufall. This looks great. I’ll have a play with the new features and let you know as well. By the way, it would be great if you could update the color parameters element to match the new ofGui one (now with a color picker). I’m slowly starting to get a grip on things so should be able to chip in with code soon.

hey @roymacdonald, this tooltip feature by @Paolo still working in the main OF branch so maybe you could add it if you like. I mean in case you are adding new features to ofxGui…

I still use this feature in all my projects. It works on Osx, Win and Ubuntu.

Hi @moebiussurfing and @Paolo. I have not been using ofxGuiPlus for quite a long time, as most of the functionalities I wahted it to have are already integrated into ofxGui. Although, it would be super useful if ofxGui had a tooltip. Does this tooltip work with ofxGui or ofxGuiPlus?

great. the @Paolo, why don’t you make a pull request?

I’ve just did it. I have added other “useful” features like this one over the last two years. I’ll try to make others simple examples and post them in the forum.