ofxGUI no background on Jetson TK1

I compiled and ran openframeworks on Jetson TK1, so far so good. The only problem is the ofxGUI didn’t act well, there is no background on the panel, as shown in the screenshot below. Any suggestion? 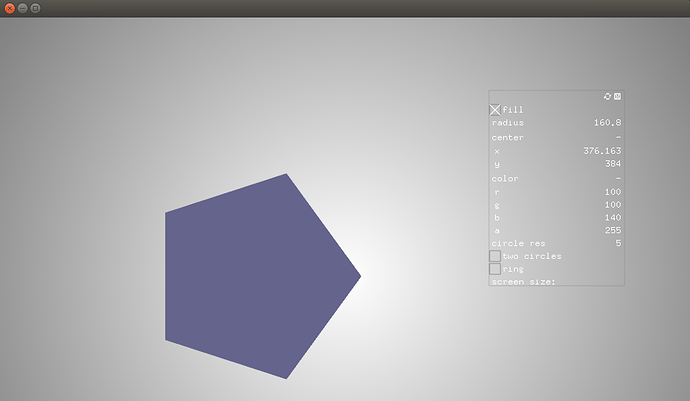 Does it act the same with all the drawing code removed expect for ofxGUI?

It act the same, no background colors. I removed all the other drawing code only kept gui.drawing.

Strange, has something turned on face culling at some point perhaps?

Is it the same if you throw in these before drawing the GUI?

Thx, i tried that, still no background.

hi, @jvcleave, you said “I recompiled glfw and changed a call in OF - not sure what the repercussions of that are yet”，in the previous question. I am wondering how did you recompile glfw3? Did you make install to /usr/local/lib or just copy the compiled libglfw3.a to the of_v0.0.0_xx_release/libs/glfw folder? and which version did you download?

I think GLFW uses CMake to build. I probably compiled a static lib and just replaced the one in OF. I think it was 3.1 at the time but not 100% positive.

I recompiled GLFW, but it didn’t help. No background (gui graphics), and I test parameterGroupExample. It is also wired as shown in the screenshot. Maybe something wrong with OpenGL? Any help?

have you tried the polygon example? does it work? i´ve noticed that the calls to draw openGL polygons are not working well in the jetson, maybe the background is drawn that way, ofBegin… ofEnd sometimes crashes on runtime, so far the only workaround i´ve find to work on the jetson is to use directly glBegin, glEnd instead of OF functions

Hey @J6rry , the ofxPanel uses ofPaths to draw everything. Can you try some ofPath examples?
I remember seeing stuff like this with the ofxPanel but cant remember the fix. I think it was something like disabling the depth test or so.

Yes, thx @amozoo, you r right, the polygon example is not working at all. Segmentation fault Error 139, both OF 0.8.4 and 0.9.0 version are the same error. BTW, you recommend that I should draw ofxGUI within glBegin and glEnd, right?

hi, ofPath examples failed to draw, I tried disabling the depth test, no luck, do you happen to know some other gui addons which are not based on ofPaths? thx.

mmh, glBegin/glEnd shouldn’t work at all in this platforms (we assume that they always work with openGL ES) so it might be that this particular board is using plain openGL which might break some things. in particular here it might seem the tesselator is broken. this usually happens cause the index type is unisgned int in openGL but unsigned short in openGL ES.

can anybody with one of this boards check that it’s really using plain openGL instead of openGL ES? in that case we would need to recompile the tesselator with an exception for this board definning TESSindex as unsigned int and add another exception in ofConstants.h unsetting TARGET_OPENGLES for this specific board

there might be some other places where we assume TARGET_LINUXARM == TARGET_OPENGLES but i think everything related to graphics is using TARGET_OPENGLES and should work as expected if we change ofConstants.h

i’ve started a PR to fix this:

can anybody with one of this boards check that it’s really using plain openGL instead of openGL ES? in that case we would need to recompile the tesselator with an exception for this board definning TESSindex as unsigned int and add another exception in ofConstants.h unsetting TARGET_OPENGLES for this specific board

It’s been a while but when I messed with this board it was much easier to get it to work with full OpenGL. I couldn’t even even get an ES simple example to work. Here is some background on that that has some recent responses.

@arturo also be aware at the time that I had to recompile GLFW as it also assumed ES under ARM. This may be different now.

@arturo , I compiled the newest version(0.9.0) on Jetson TK1, the problem is still there, and I checked the polygon example @amozoo, they all failed.
I am a newer on github, so what can I do to fix that issue on the new PR?