I was reading about datamoshing and fell in love with it. I could only find one single datamoshing tool that is able to run on Linux: https://github.com/happyhorseskull/you-can-datamosh-on-linux

It is basically a Python script that wraps around the famous ffmpeg, a vast software tool suite of libraries and programs for handling video, audio, and other multimedia files and streams. Ffmpeg is used for the video format conversion. The Python script also has the algorithm to edit i-frames and p-frames.

The Python tool already needs some maintenance (found some broken stuff), and I thought it would be a nice exercise (C++, Python) to refactor the “ you-can-datamosh-on-linux ” as an openFrameworks addon. There’s no decent datamoshing addon written yet, and I think this could be interesting for a lot of people in the oF community.

In plain English, datamoshing is an umbrella term for an array of cool effects you get by glitching, altering, or otherwise breaking the fundamental structure of video files’ data. We datamosh because we can, and because it looks really cool. What’s happening in the Python datamosh tool is that first the video file is converted to AVI format which is glitch friendly as it sort-of doesn’t care if you delete frames from the middle willy-nilly (mp4 gets real mad if you delete stuff in a video file).

There are 2 types of frames that we’re dealing with: i-frames and p-frames. I-frames (aka key frames) give a full frame’s worth of information while p-frames are used to calculate the difference from frame to frame and avoid storing lots of redundant frame information. A video can be entirely i-frames but the file size is much larger than setting an i-frame every 10 or 20 frames and making the rest p-frames. The first i-frame is the only one that’s required and after that we use p-frames to calculate from frame to frame. The encoding algorithm then makes inter-frame calculations and sometimes interesting effects happen. 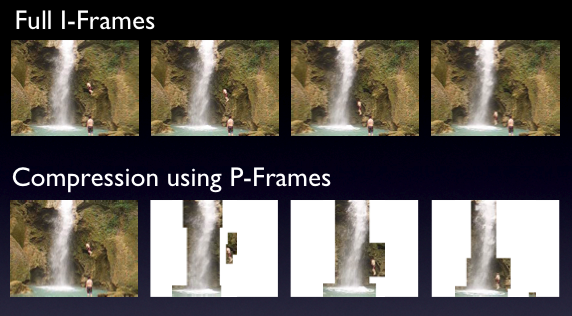 Initially datamoshing was just deleting the extra i-frames maybe smooshing some p-frames in from another video and seeing what you got. However the glitchers eventually grew bored of this and discovered if they repeated p-frames that the calculations would cause a blooming effect and the results were real rowdy. So that’s what the repeat_p_frames variable does and that’s why “it sounds like a dying printer”-@ksheely. Because we’re repeating p-frames the video length may get much longer. At ((25fps - 1 i-frame)) * 15 or (24 * 15) a single second of 24 frames turns into 360 frames which is (360 frames / 25 fps) = 14.4 seconds.

After we’re done mucking around with i-frames and p-frames the results are fed to ffmpeg which locks in the glitches and makes a twitter-ready video.

What needs to be done

I need to write a ofxDataMosh oF/C++ class that opens an AVI video file and edits its i-frames and p-frames to generate the effect.

In order to achieve such goal, the following questions need to be answered:

Looking at “ you-can-datamosh-on-linux ” and the ofxAvCodec gave me some good insights on how to do this.

When writing ofxDataMosh we need to keep in mind how the user will invoke it (ofSetup(), ofUpdate(), ofDraw()). The “ you-can-datamosh-on-linux ” tool only writes a new video file to disk, which is a decent start. But an ideal goal would be the possibility of playing the actual glitched video on the screen from an ofApp.

I created a Bitbucket Git repo with my personal account so we can push some code https://bitbucket.org/bernardoaraujor/ofxdatamosh

I started with the template from https://github.com/openframeworks/ofxAddonTemplate. The “ you-can-datamosh-on-linux ” is released unlicensed. I’m using MIT (from the template) to keep things as free as possible on ofxDataMosh.

Once we have something stable we could move it to GitHub to make it popular.

A good introduction to FFmpeg: https://github.com/leandromoreira/ffmpeg-libav-tutorial

anyone with sharp make skills?

this is how I did it:

if I rename libs to something else make will run just fine.

Hey!
just some thoughts:
Datamoshing is a kind of outdated aesthetic. It used to be the thing back in 2010. It was used and abused and eventually people stopped using it as much. This is why you probably found just outdated code.

Have you been able to compile and run ofxAvCodec?
if not I would start from there.

I know but it still looks nice hahah

yeah I mentioned in the post… I did give it a look, I used the ffmpeg build instructions from there.

I built it and put the artifacts inside libs

I suspect there’s some mismatch between the autoconf parameters and my machine. Maybe I need to add some other parameters to autoconf that will match the oF make build environment.

what OS are you using?
did you try the already compiled ffmpeg that is provided by ofxAvCoded?

Also it is important that you correctly setup the addons_config.mk file in your addon.
Take a look at ofxAvCodec’s addon_config.mk

fixing addons_config.mk did the trick!

I’m using ubuntu, so I added the following to addons_config.mk:

anyone get this up and running?