I´ve recently updated ofxAudioAnalyzer addon. New algorithms has been added and now its much easier to use.

ofxAudioAnalyzer is an addon for audio analysis that wraps Essentia library. It provides the following algorithms :

This are the main New Features:

This forum thread can be use to any further related issue, apart from Github repository issues.

I’m trying to build examples from ofxAudioAnalyzer addon.
Get around 100 issues about essentia library.

There are added static builds of essentia for linux64 included in the addon repo. Try using the makefiles, they already link them.
Also check this for the audio player: https://github.com/leozimmerman/ofxAudioAnalyzer#audio-file-player

I’m ussing of.9.8 and i’m getting this error:
Any idea? the other examples works fine i just can use the sound buffer.

@lkkd Are you using leo’s version of ofxAudioDecoder? On GitHub he writes:

Otherwise have you tried following the fix Xcode suggests for the first error? As for the 3rd error, AUDIODECODER_OK should be defined in audiodecoderbase.h located in the addons/ofxAudiodecoder/libs/include folder. Do you have that file present and is there the following on line 56:
#define AUDIODECODER_OK 0
Finally, how did you include the addon in your project? Through Project Generator or by hand?

You could also try my pull request, which fixed issues I was having using 0.9.8 and ofxAudioAnalyzer on a mac.

I tried the sugestions and i’m getting other errors.
For this part n line 56: #define AUDIODECODER_OK 0 is alredy there send you a screenshot.
I added the addon using the ofPlugin
Thanks.

You have this problem when adding the addon to a new preoject only?
The addon examples compile ok?

If it’s only in new projects, try adding the addons with the Project Generator (https://github.com/leozimmerman/ofxAudioAnalyzer#usage)

Hi. I’m running on linux 64. I tried using the makefile to compile “example_emptyExample” but it seems to fail when linking. I get a bunch of lines like this:
/media/stuff/playground/openframeworks/of_v0.9.8_linux64_release/addons/obj/linux64/Release/ofxAudioAnalyzer/src/ofxAudioAnalyzerUnit.o: In function ofxAudioAnalyzerUnit::setup(int, int)': ofxAudioAnalyzerUnit.cpp:(.text+0x4f22): undefined reference toessentia::standard::Algorithm::input(std::__cxx11::basic_string<char, std::char_traits, std::allocator > const&)’

Any thoughts? I’m pretty sure I was able to use this library about a year ago, but I have since re-formatted my computer and am using a fresh openframeworks install.

OK I fixed it by recompiling essentia, and then swapping in the “libessentia.a” file.
It was necessary to use the lightweight version (wasn’t working until I read the notes for building essentia).
So I guess the answer was there the whole time… but maybe someone else will read this and feel encouraged.

I am geeting >>No member named 'numMessages in ‘ofxPd’ <<
I have it included in my files and as an add on, pd and audioAnalyser examples work.

Does anyone know if this addon can do VAD - voice activation detection? 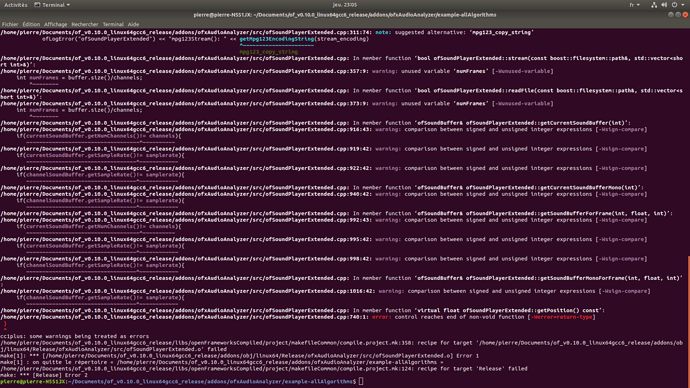 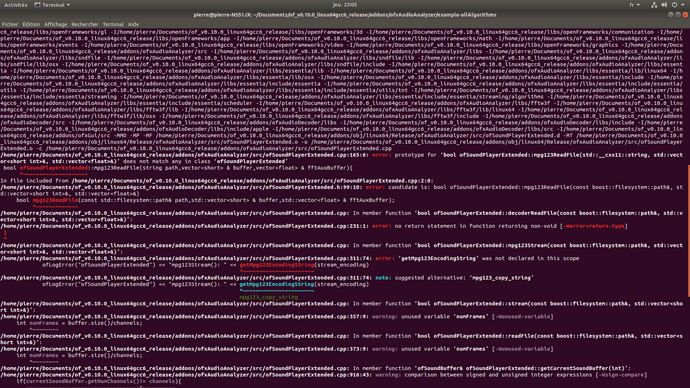 Have you checked this: https://github.com/leozimmerman/ofxAudioAnalyzer#audio-file-player ?