I’m trying to get my webcam working with oF on windows 10, but it’s not working properly in any version that I have here (0.9.8, 0.10.0 and 0.10.1). In all of them, the result is just as displayed on the screenshot below, running the VideoGrabberExample

The camera itself is not the issue, as it works on the browser and other applications, and even its status LED turns on when running the videograbber example. Just the image that is grey all the time. Any ideas on that?

Have you checked you’re using the correct deviceID? It looks like you have a number of devices in the console window. Your logitech camera is device 1

I am, as you may see in the logs, it’s setting up device 1 (Logitech Camera) and logging it as ready to capture. Also, as I mentioned on the original post, the camera’s LED lights up, indicating that it’s in use.

New info: for some reason, the isFrameNew() method is always returning false. Not sure if it has something to do with camera drivers, or with the OS itself. Still investigating.

Tried using openCV’s VideoCapture, it can’t open any device index that I tried. I’m really not understanding this, as I can get the camera’s feed via javascript and on Unity, but nothing on oF or Cinder. Any new ideas on what may be causing it would be most appreciated.

I just tested videoGrabberExample with Logitec web cam C925E and it works ok.
I didn’t even install a driver, no code change (deviceId = 0). 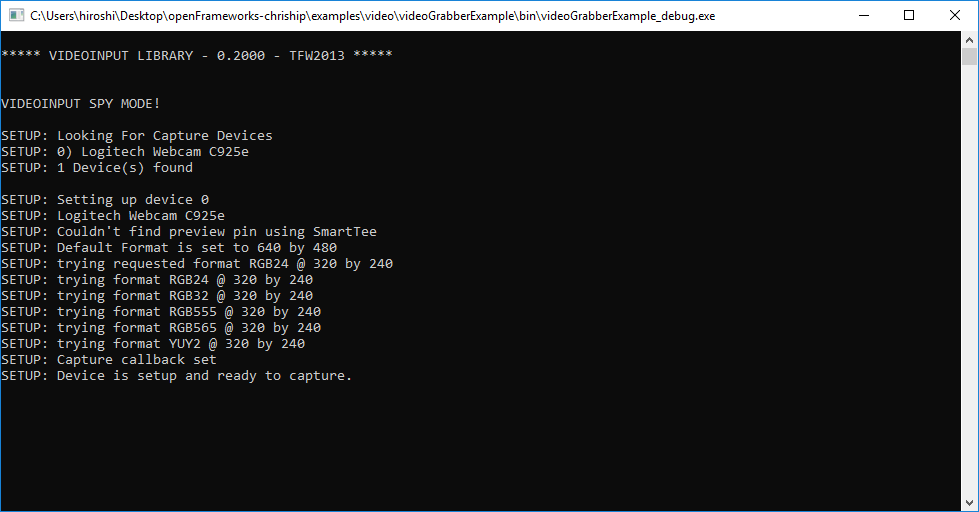 +Edit
Here is ideas I would suggest to find a solution.

Thanks for testing @hrs. It’s most likely something related to my setup, but I have no idea even where to begin to investigate, and the fact that the camera works in every other application that I tested makes it even worse. Regarding your suggestions:

The only other application where I’m having issues is TouchDesigner. In it, using DirectShow it outputs that cannot connect to device, and using MediaFoundation it gives no error, but also no image. AFAIK oF uses DirectShow right?

I’m not familiar but it seems so.
In the ofConstants.h, seems like we can switch to Quicktime.

Nice observation, I’ll try that in a bit!

So, things are still no good:

All in all, I’m pretty much on the same place. The worst part is not being able to identify the source of the issue. Any idea on how to debug it will be handy.

I found this post in which Arturo mentioned using GStreamer to get the webcam, so I decided to give it a try. Before running on oF I tried using the command line, and this is what happens:

I’ve never seen issues with webcam access permissions on windows before, and have no idea how to solve it. I’m starting to think that it’s really something related to the webcam itself, I’ll try to get another one to test today.

Ok, wrapping up this: I still have no idea what was causing the issue, so I went full berserk and reinstalled windows: problem solved, camera working as it should. Terrible, but what can we do about it?

Anyway, thanks again everyone

Wow, thanks for report.
Might be because of registry setting or security settings?

Maybe something in the registry, yes, but it’s another thing that would probably take longer to find than to reinstall the OS.

Thanks for all your help during these last days!