I have been working with James George on a way to integrate OF with Qt, i.e. compile OF apps that spawn and utilize Qt UI windows. While there has been discussion about using Qt Creator as an IDE for OF on Linux, this is instead an attempt at integrating Qt and OF. Our motivation for doing this is to develop a cross-platform workflow for OF apps that require robust, native UI’s.

Here’s what we could use help with:

Steps to get ofQt running:

ofQt contains a simple example that lets you control the size of an ellipse with a Qt slider, and manipulate values in a Qt table. You should be able to compile the project in Qt Creator without any special setup, so long as you use the custom copy of OF included in the repo. 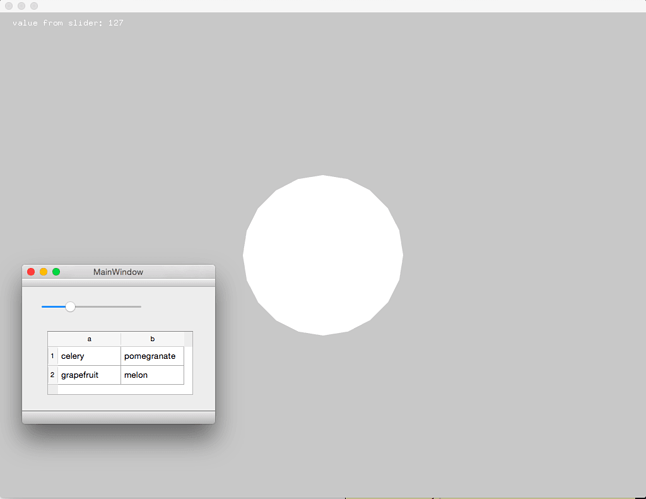 ofQt uses the layout described in this StackOverflow post. This is what Qt Creator calls a “subdirs project”, in which OF is a static library and ofTestApp is a subproject. The tree structure looks like this: 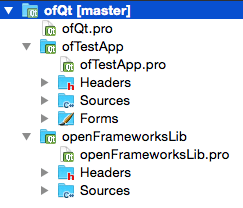 The main .pro file ofQt.pro shows the relationships between the container project, the subproject and static lib:

There are three .pro files in total: 1) the container project ofQt, 2) the app subproject ofTestApp which contains the OF app and the Qt UI file, 3) openFrameworksLib, or the OF static library. The Qt UI is defined in mainwindow.ui, which you can edit visually in Qt Creator.

I’m working on an university project where I need to develop a robust GUI for an open frameworks project.
I would love it if you could explain how to accomplish what you have done. I mean, integrating my OF project in QT so I can develop the UI.

First of all, thank you for this fantastic job!

Hi thank you very much for this!

Anyone else running Qt UI with openframeworks?