Here is a first draft, so far it does:

Do you think that approach is fine?

Here is the code for the frontend.
It uses electron, react, redux, material ui.

i think it creates/updates/updates multiple now corrently.
i am not very elegantly calling the command line pg with an addon list and delete the addons.make file and regenerate it with the package manager.

if someone wants to give it a try, the UI is now much cleaner.
there are still some smaller bugs and things to be improved, but it is already quite usable. 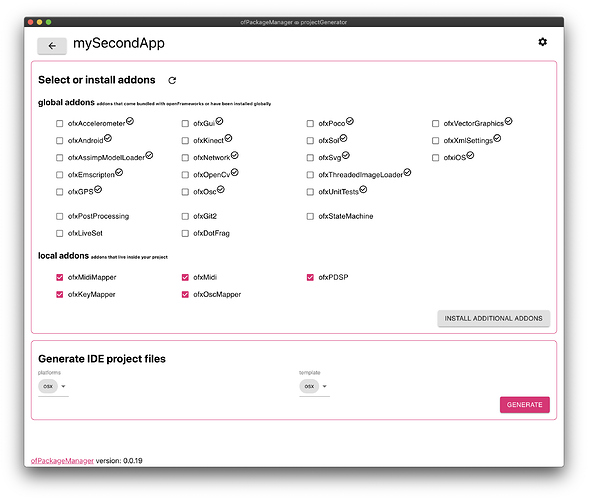 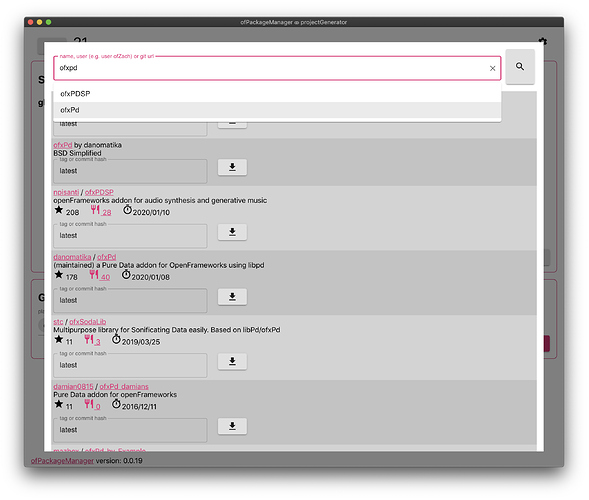 Hey Thomas! this looks really neat. I’ll try it now.
Do you have an already built front end UI or do I need to build it?

i have not uploaded a build yet. you can find the insturctions in the readme.
it also needs the projectGenerator and ofPackageManager cli tools installed. ofPackageManager can be installed via brew.
let me know if you encounter any issues.

yes. was able to build it. I’ll come with some more feedback later.

my feedback so far is maybe just two things:

In general anything that streamlines the setup/usage is great.

It also gets me wondering if we could move from a cpp command line project generator to something that doesn’t need compiling like python? Probably would be a huge amount of work to port over, but then would make tools like this so much easier to make and no build steps needed on each platform.

hey theo, thanks for the feedback.
i agree with 1. and i think this can be done in a smarter way. if the package manager is bundled with the pg and package manager cli tools, as well as the database, then i guess it only needs to know the openframeworks path.
2. i strongly believe that local_addons is the way to go. but for the transition phase i would like to default it to the global addons path. and let the users optionally select to install locally in the install modal.

Ace work! Though I found the implementation and abstraction a bit confusing. In yarn and npm the install cmd reads a config and then fills the local dependency folder, but here it wasn’t too clear where things are coming from and going to.

A situation I’m often in is trying to juggle forks and commits of addons with addons I’m working on locally, and then there not being an easy way to have an overview of what’s what in a project (ie. “source of truth”).

A package.json could help to hold all the user readable / editable information and metadata like version no, author etc. With the addons.make file acting more like a node_modules equivalency once ofPackageManager has done its thing.

Also tangentially relates to the addons_config.mk, which I think would be better served by a JSON file, and could also specify package manager-friendly dependencies…

hey, thanks for the feedback.

The idea behind that was that an ofPackageManagerised project is compatible with other oF projects. Or seeing it from the other side, ofPackageManager works in theory even with unpackaged projects. It will try to find and download any addon listed in the addons.make file.

I agree that a json based solution can be more verbose and programmer readable. But it is probably not that easy to integrate into the make build system. And letting the package manager store its information in json format, then generating make files and then letting the project generator generate ide project files also did not seem right.

What would be needed to make the flow clearer? Better console output? Better readme?

hope that clarifies things a bit.

When I saw the generated comment I assumed it was that; so to make the flow clearer I would add documentation that explains how comments can specify particulars for an addon, and some examples of common or peculiar user flows. My ideal would be to have this reduce complexity rather than add it (I’m terrible at remembering CLI commands), so in practice that would mean trusting only the ofPackageManager install command to get everything prepared for a project. For example in an addons.make like this:

It would be awesome to have the CLI do:

I hope this is not requesting more complex features, but rather my perspective is that the wizard structure works really nicely, so on this basis it is addons.make that defines things, followed by ofPackageManager handling them - and the rest of the CLI commands for special cases.

I think you only need to commands, the first and most important one is install. The second one is the add command.

I still need work on better console outputs.
if i remember correctly you always need to specify url and hash in addons.make. Just the url or the hash wont work.

i hardly have to modify the addons.make file manually. And i think that should be the goal.

if you or anyone else is intersted in collaborating or disussing things, giving more feedback, we could also schedule a slack call.

heyho people,
i need your help again. i just updated the packagemanager and the frontend. and it needs to be tested.
also, i made the ofProjectGenerator cli installable via brew. The package manager frontend should now hopefully be signed and notarised.
I improved the configuration quite a bit, but that still needs to be tested on other machines.
I think it works the best if you install ofPackageManager and ofProjectGenerator first and run the config task and then open the frontend. It should hopefully pick up the paths automatically. If you run it the other way round, it should hopefully warn you.

there are also windows and linux versions of the frontend available, in case you manage to compile the cli on these platforms.

hello,
thanks to @prisonerjohn, i uploaded a windows build. could someone test if the frontend runs on windows without problems?
the steps are as follows.

the frontend tries to find both CLIs in the path, if not available you can edit the config at $HOME/.ofPackageManager/frontend.config.json or fix values via the frontend settings modal.

I am not able to get the front-end to find the command line on Windows. There is no frontend.config.json file in that folder, and I don’t see a settings modal either. The command line tool is on my %PATH%.

If you let me know which lines in the frontend code to look at, I can dig around to see what’s up.

here is the init function, which checks for the cli tools and generates the frontend config file.

btw the projectGenerator should be also added to path.
there is settings icon on the top right cornor.

here is my example config, you can save it to HOME/.ofPackageManager/frontend.config.json 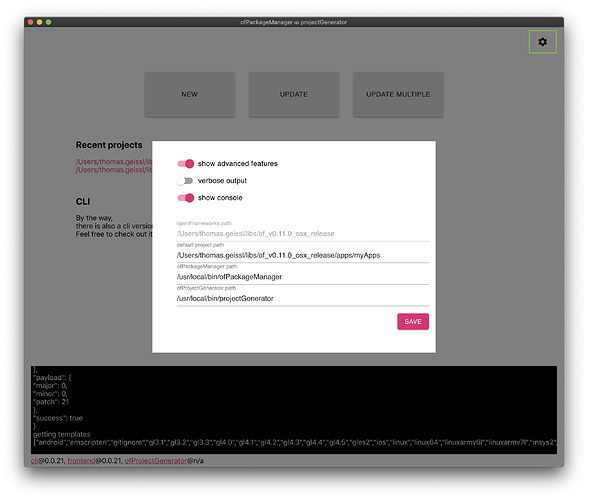 let me know if that solves the problem.

hello,
some small updates on osx. the frontend should be now installable via brew (cask) as well. could someone test if this works?

i updated it, it is getting stable and the interfaces is now much cleaner. the local addons panel is not shown if there are none available. the platform and template panel is shown if advanced features are enabled.