With great thanks to @mkrebs for his assistance, I was finally able to get a codesigned 64-bit APK published to the Google App Store.

Since it also took banging my head against opaque errors and seemingly-undocumented and/or mis-documented (especially in Android docs) requirements on and off for about ten days, here are my notes on what I can remember of what steps were needed.

This is highly valuable and as forum posts tend to get lost, I’d like to see this somewhere more permanent, maybe the oF website/guides or the oF wiki.

@edapx is leading the effort in a bit of reorganising documentation etc, would like to check in with him on where this can go.

@Drazinut, thank you very much for this. Your tips are very much appreciated. I’ll be implementing these steps to finally get my app ready for Google Play.

With luck I might be able to launch the app before end of this year. Thank you so much for this.

The thought of every person spared some suffering by this post comforts my past frustration.

I felt compelled by compassion to share what I’d learned, and also to write it down for my future self.

If you have problems or questions, feel free to ask and I’ll see if I can help.

Finally, that 64bit option shows itself! 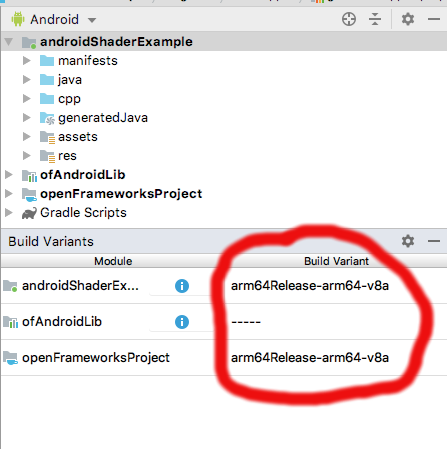 Only need to make the shaders work and we’re good to go. Seems like GLSL ES don’t seem to work on the Android port ever since the shift to Android Studio from Eclipse. Might as well get my hands dirty on this one. Fingers crossed.

Argh, today I’m again getting the dreaded, way too vague “The project is using an unsupported version of Gradle.” error trying to build an APK, not having updated anything, even using backups of previously-working versions.

It sure would be nice if Android Studio would also mention, at a minimum:

I’ve tried several things to no avail yet. Will keep trying and report when/if I find a fix.

Ok, I managed to get my projects to codesign again, but not in the current version of Android Studio, 3.5.1.

oday I’m again getting the dreaded,

What versions are you using these days?
I am on Windows and I want to make a clean install of Android Studio and NDK…

Could we use the current stable versions but without signing on stores?

Sorry I missed this question.

And, I would like to know the answer myself. I’ll have to re-investigate. I haven’t tried any new versions of Android Studio since this, yet . . .