Hi guys
revisiting an earlier project and simply trying to get the code compiling.

Hi guys, I programmed the following setup in OF. -Background video is playing. -On top of the video I show a live feed from a camera. The live camera image is masked by using a static capture from the webcam. (difference keying). The image is RGBA, so the masked pixels are transparent and showing the video that’s underneath. The following code is working properly, but it is too slow. It only plays at 12fps (and memory is leaking). It would be great if anyone would like to take a look at the …

The error I am getting is

But in my Xcode project directory I definitely see the file

Guessing my issue is something to do with not properly adding new ‘addons’.

Also, at least for me, the way Xcode does not exactly mirror whats in your finder makes things more confusing. 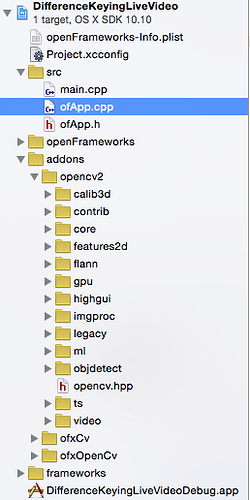 Also getting a similar error in ofxCvShortImage.cpp
‘opencv2/core/core_c.h’ file not found

But in my Xcode project directory I see
Project>addons>opencv2>core>core_c.h

At the finder level the pathing is a lot deeper

Addendum, I have a partial solution in that I’ve used the ‘AllAddonsExample’ project as a template, and simply copy pasted my main.cpp and ofApp.cpp files.

The best way to include an addon is to use projectGenerator, which is included in the recent release versions of oF (you can find it directly under the extracted folder. If not, download the latest oF).

Including addons manually is very tricky as you mentioned. The file hierarchy is just a list of files to compile, so Xcode will compile them but does not refer to the include files in the hierarchy. There are several ways to add include files, but the easiest way is to use projectGenerator (or, copying an example project is not the cleanest way, but often useful).