I’m quite a new on openframeworks, so maybe this is quite an stupid thing.

I just compiled the MSAFluids example, and when running it, I get this weird thing instead of particles:

It does look like lines / triangles instead of points…

Does somebody know what I’m doing wrong here? 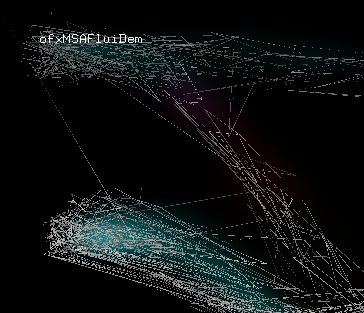 I had this happen too. I “fixed” it by changing the following line in ParticleSystem.cpp -

A little bit late… but thanks!!!

wow thats strange that that happens! Looks nice though

I"ll look into it.

I also found this some time ago, but I added a shader to control the particles and the results were realy nice. looks awesome! I did something similar for the depeche mode video a while ago, though rendered GL_LINES (and GL_LINE_STRIP) instead of triangles.