hey @stephanschulz,
I am having the same problem.
I tried setting the http-server too, but it fails in the same way.
I am in High Sierra and OF GitHub branch.

I didn’t know how to setup this (from OF website):
(Maybe this can be the problem…)So I need to run source ./emsdk_env.sh every time…

type source ./emsdk_env.sh to set the system path to the active version of Emscripten. You can copy the output of this command and add it to your .profile file, in order to save this variables also for the next sessions. 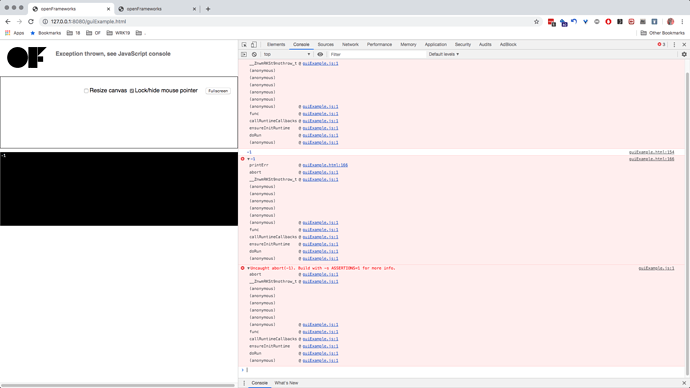 I used the same @alp guide.

These steps worked for me on macOS 10.14
It took forever to build emsdk but once it was done.

Note: Might be good to remove old installs of emsdk and any .emscripten files in your home folder before installing/building emsdk as above.

Thanks @theo,
but I followed your steps here in 10.13 but do not worked. Getting this final error when compiling an example:

ok. sorry @theo . it worked!
I forget to run the script for libs again:

so, @stephanschulz, you can try this way.
it’s working here fine. The local http server setup was not required when you run the app with
emrun --browser chrome bin/advanced3dExample.html
because it seems ‘it runs his own server’

EDIT:
I noticed that when running the emscripten/download_libs.sh, macOS building stops working, so we can’t share the OF folder to both buildings.

remove old installs of emsdk and any .emscripten files in your home folder

then followed the same steps as @Jona

Then use PG to create guiExample with Emscripten template: 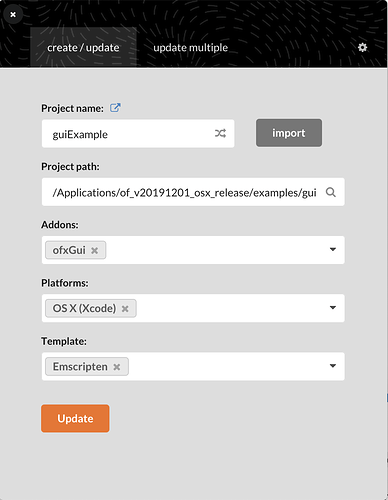 I think this assumes the GitHub version of OF. not the nightly build? since I do not have a ./dev/download_libs.sh

I am using GitHub version… Refresh this post, I added /dev too… just in case it makes it simpler…

Regarding your second question: ofxMidi, ofxOsc, ofSystemLoadDialog and some of the input_output examples do not work with Emscripten… but there are some workarounds: https://emscripten.org/docs/porting/connecting_cpp_and_javascript/Interacting-with-code.html exchanging integers / floats between open frameworks and java script is quite easy, but replacing something like ofSystemLoadDialog seems a bit complicated, at least for me. Another limitation is that you need to use GL ES instead of GL SL if you want to use shaders.
Thats what I found so far…

mh.
I placed your dev folder in the scripts folder.
now running download_libs.sh from the emscripten did start installing a bunch of stuff. 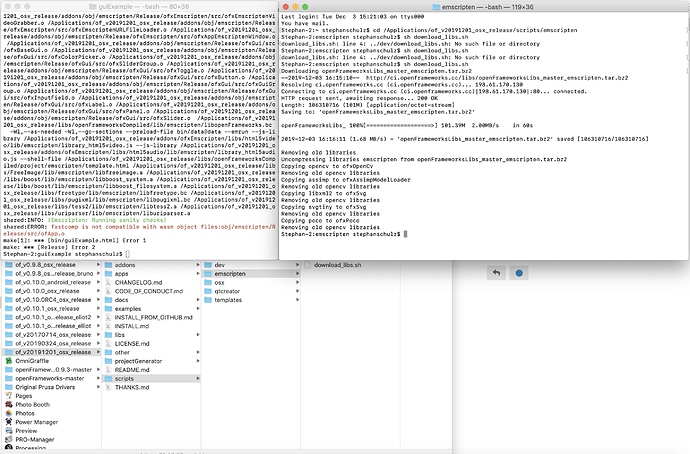 I guess I will download the GitHub OF version and try it with that.

thanks again for your help

then in the same terminal window cd to the project folder.
then call emmake make
and the build worked

I did not need to install via /openFrameworks/scripts/emscripten/download_libs.sh

I was just going to write I think the issue is that you should delete the contents of:
⁨libs⁩ ▸ ⁨openFrameworksCompiled⁩ ▸ ⁨lib⁩ ▸ ⁨emscripten⁩

When switching to different emsdk versions.
I think the reason the nightly worked is that it hadn’t compiled the OF project with a different emsdk.
( I ran into this yesterday )

I would guess if you downloaded a fresh zip of 0.11.0 to a different location and do the steps in your last post it would also work.

Thanks everyone for helping with this though.
Its fairly gnarly to debug.

And if anyone is feeling brave and wants to help figure out why this is happening - would be amazing:

With latest master / 0.11.0 I am seeing meshes with what seems like inverted normals or depth testing failing. assimpExample: 3dPrimitiveExample: however 2D shapes...

I placed your dev folder in the scripts folder.

thanks for this info.

the two examples worked fine.
but trying to compile my own project still produces errors.

warning: To disable errors for undefined symbols use -s ERROR_ON_UNDEFINED_SYMBOLS=0

I tried to delete the Emscripten folder content as you suggested.
also started new terminal window and ran ./emsdk commands as mentioned earlier.

also noticed when making edits to the guiExample src and calling emmake, I did not see those code changes take effect.

@stephanschulz Did you also delete the emscripten folder of the guiExample? Normally the changes should take effect if it runs at all. Regarding your own example: Is it possible that you use some addons or functions that are not compatible with Emscripten? There seems something wrong with a .txt file…

@Jona thanks for pointing this out. I only now notice that running emmake creates a folder called obj with an Emscripten folder inside.

@Theo as mentioned earlier I am now able to compile and run guiExample. BUT as soon as I add gui.loadFromFile(“settings.xml”); to setup() the app will not run successfully in the browser. I guess Emscripten apps do not like loading and writing to disk? 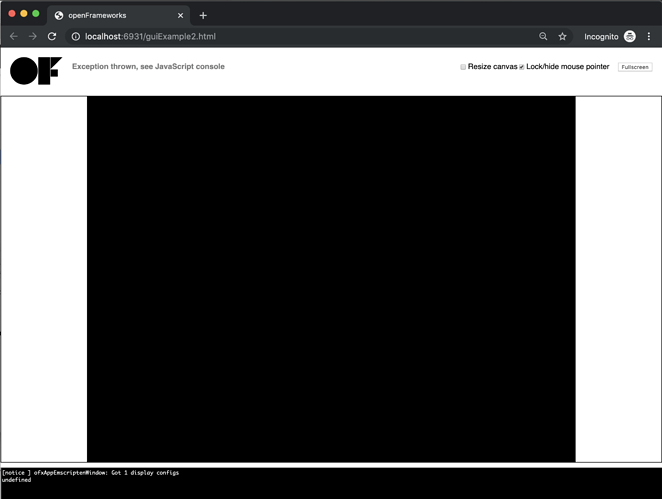 @stephanschulz I think you can not read files from disk easily/the used way with Emscripten.
But you can read files that are in the Data folder of the Emscripten project.
This could be a start for reading files from disk, I do not understand it by myself: https://emscripten.org/docs/porting/connecting_cpp_and_javascript/Interacting-with-code.html
and here @kokawa2003 managed to save an image to disk with Emscripten: I want to save image

settings.xml is in my data folder.
and usually calling

retrieves this xml file from the data folder. but maybe with Emscripten I need to change the file path?

@stephanschulz Then it is something else. I do not think that you need to change the file path.

files in data are packed in a special format and served as a file system emulation when you use emmake make run so it should work. if you compile the aplication in debug you should get a proper stack trace when the app crashes which will give you a clue of what might be going on.