Now we opened an exhibition Kuflex #1 at gallery Media Art Abrau (Abrau Durso, Russia). It consists of 8 interactive installations, made with openFrameworks. All works features depth cameras, projections (or LED display) and sound. 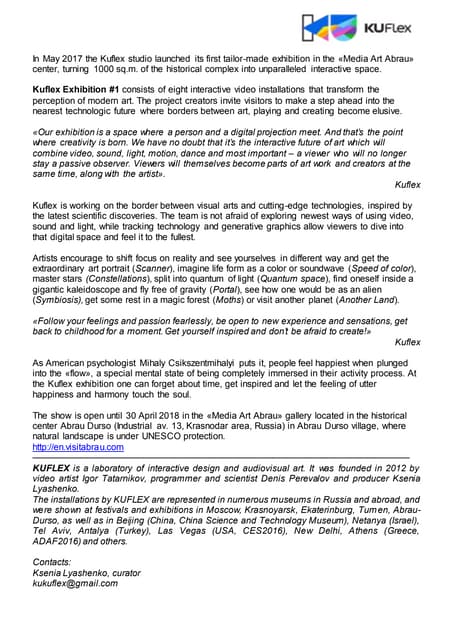 This is detailed description of the conception and the eight interactive installations exposed at Kuflex #1 Exhibition at Media Art Abrau (Abrau Durso, Russia)…

We published the oF-addons and functions which were used extensively in this projects:

Two projects (Another Land and Speed of Color) use not oF, but Unreal Engine 4 for rendering, whereas capturing data from depth cameras and modelling physics performed using oF. Control information from oF-programs is sent to Unreal project using our plugins for Unreal Engine (will be published soon).
One plugin sets positions of objects in Unreal scene (in Another Land), and another plugin sets content of texture (in Speed of Color). Plugins are based on this code for creating texture in Unreal Engine 4.

We will be happy give more detailed information on projects. Also we are ready to teach oF and UE on master-classes (English language) and looking for collaborations all around the world