@arturo, I’m getting at least two errors when trying to compile a new project with ofxAppUtils and the latest openFrameworks (0.9.8) on OSX. In ofxParticle.h:

yields unknown type name ‘ofPoint’. And I’m also getting the same error for this line in ofxParticle.cpp:

I’ve defined the OF_USE_LEGACY_MESH constant in ofConstants.h but could only get around this issue by using glm::vec3 instead of ofPoint

Is there an issue with the typedef of the ofPoint class?

In any case i don’t see why that would happen ofPoint still exists and it’s defined as ofVec3f so it should work just fine.

That’s true - I am using a recent build so not 0.9.8 as such. I’m fairly new to all of this and have already built an app that’s bigger than I (or my laptop) can handle. But here are the error messages I get in ofxAppUtils: 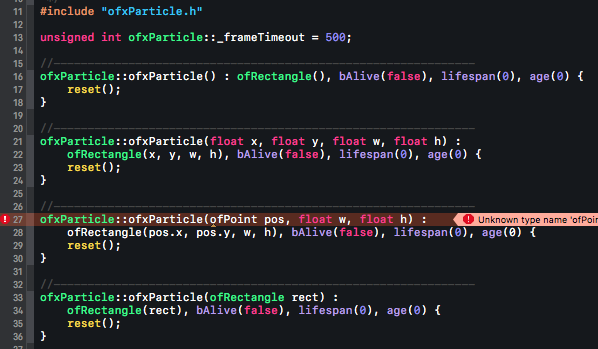 If I change ofPoint to glm::vec3 it seems to work. Mind you I’ve just tried using glm::vec2 and it also worked. I have no idea what I’m doing.

after the other includes in ofxParticle.h and it should work

Cheers! That fixed it.