Installing the app on a mac

Hello, i can’t install app on mac. What should I do ? 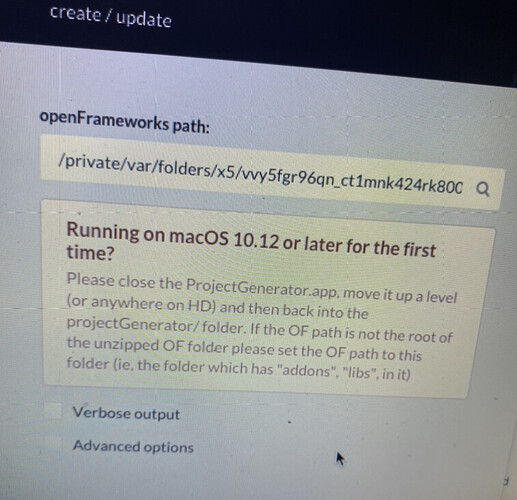 try clicking on magnifying glass and chooshing the OF installation folder

Generally, you download openFrameworks, unzip it, and put the extracted folder wherever you want to install the current release. On macOS, it’s common to create a Developer folder inside the user or home folder, and within that, create an openFrameworks folder, where you put your releases, at least that’s what I did.

Now, the first time you open the projectGenerator app, it tells you to close it and place it somewhere else, for instance on your Desktop. Once you’ve moved it, you need to open it in its new location and - as @dimitre already mentioned - edit the openFrameworks path. It has to be set to wherever you installed the current release, meaning where you put the extracted folder.

After that close the projectGenerator app again and move it back to its initial location, within the extracted openFrameworks folder, and you should be ready to rock!