I have tried to build any example from the following addons:

and also YCAMInterlab/ProCamToolkit (this seems to be 2013)

a list of issues. I have tried my best to solve them, but one fix leads to another list of erros… far beyond my programming skills.

I have already googled for any other projector - camera calibration tool or tutorial but I can’t find nothing from less than 2 years old, meaning a lot of libraries have changed and a lot of methods are deprecated…

in order to study the code, Is there anyway I could make it work without bothering advanced users too much? I am looking for a camera - projector project that works a long time ago…

any help will be really appreciated

what error do you have in the compiler?

This is one example while attempting to use ofxCvCameraProjectorCalibration addon.
After trying to update some libraries (eg. ofxCV) adding deprecated methods (like ofxCvMain.h) and thinking I was almost there, this list of errors made me give up insisting… 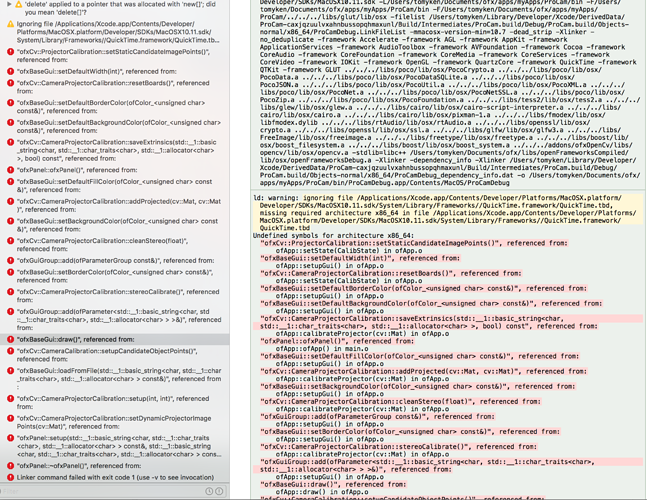 did you add correctly the addons? sometimes when you add an example you have to delete add the addons again.

Ah, sure, until there I believe I knew.
First I opened the example as is. And tried to locate missing files and libraries. But one error leaded to another.
Then I have tried to rebuild the file from scratch following the code from the example.

In both cases there was always a lot of incompatibility issues that was beyond my programming skills… it seems there is nothing we can do.

Sometimes it’s easier to just use the older version of OF to get it to compile/run and then use that to rebuild for a newer version.

I was afraid to hear that although I understand it.
But I am more afraid to find out that older version of OF will not even compile on newer IDEs, no?

yeah - that can happen as well