How to include addons to existing Android Studio OF project?

Hi, I could successfully compile and run androidEmptyExample project on Android Studio yesterday.

And now I’m trying to include an addon(e.g. ofxPd) on top of the empty project.
Since I just started out using Android Studio, I don’t know how to add Header Search Paths or C flags in Android Studio.

I’ve been googling for a few hours to figure it out but still couldn’t find a useful easy-to-understand information.

I would really appreciate if someone can share the basic process to include addons to Android Studio project. Thanks in advance.

I may be mistaken, as I am currently trying to get an addon to work on Android, and having linking problems, but I think the intended method is an on other platforms:

Hi!
Just put the addon in the the addon folder, and in the make file addons.make and add the headers in ofApp.h 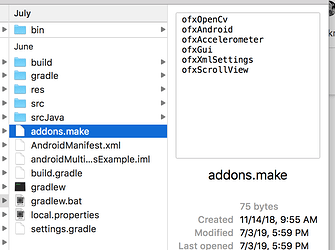 addons.make is just a text file with the names of addons in it, yes?

Is that all that projectGenerator does when you update a project and change its addons?

When you compile the addon.make file include the addons.
Yes is just a txtfile.