Just downloaded Xcode and it won’t compile OF projects.
It gives an error on Prepare build saying - The Legacy Build system will be removed in a future release.

Is this the release where it has gone?

Can you check in Xcode: 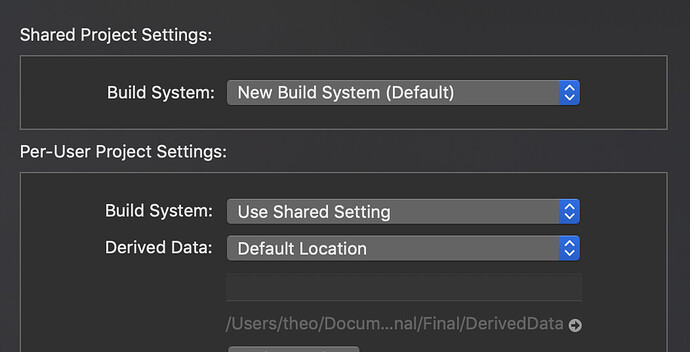 Thanks,
Yes I am using OF 0.11.2 and that will fix several of the examples I have tried from the examples folder.

However, I did write by own app based on the ofBook’s :- Ooops! = Object Oriented Programming + Classes tutorial which did work and that is not fixed by this change.
I got four errors about not being able to find files.
The full error messages are in the attached file:-

However I spotted that there are what seems to be matching warnings for each error.

Do you know how these could be corrected. I did have a look round but didn’t see anything.
Thanks again

So what I had to do to solve this was to basically create the files I had created, ofApp.cpp and ofApp.h in the project again using Xcode.

Then I could take the original files I had created and copy and paste the contents of these files and the others I had modified to match. That and changing the build system solved the problem.
Thanks @theo.