Hi all!
I don’t realize this problem on my software. I made a visual, i used the code very similar of “billboardExample” and all works. But now i added ofxSyphon and if i try to send my texture using “publishTexture” or also using “publishScreen”… i have a crash. You can see it on this screenshot: 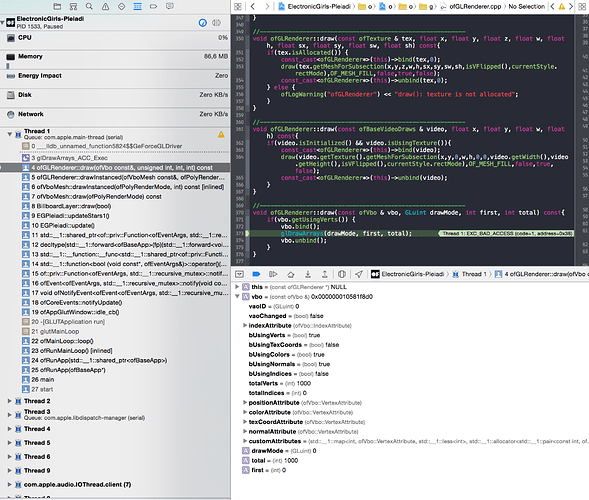 Now i try to put ofxSyphon on “billboardExample” and it works… So… i try to check where is the error on my code.

After 3 hours i still don’t have find the problem. It seems that i have some conflicts when i use my billboard mixed with some fbo. I continue to look for the solution… but maybe somebody have had the same problem about ofxSyphon/ofVboMesh/ofFbo. :-\

After more hours i found something… but i really don’t understand why.
If i add syphon in the end of the “draw” method of “billboardExample”, it works… but if i remove “ofDrawBitmapStringHighlight” or i pass an empty string, i receive the same crash.

I’m seeing the same problem on OpenFrameWorks 0.9.8. I’m not using ofxSyphon, but my own implementation (albeit with the latest version of the Syphon framework).
My app has been running fine with syphon for years. Recently I’ve added some ofxBox2D physics that draws stuff with ofVboMesh and it crashes. My call stack is the same as Mauro’s.
Is Syphon forgetting to unbind something? I wouldn’t know where to start looking…

There was a comment in the ofxBox2d::draw() call about using mesh.draw() until they switched to 0.8.0.
So i changed that into ofPolyLine::draw() and now it’s working!