Its been quite some time seems I pulled the master and I can’t seen to find a way to generate the examples. devApps generator is there.
I cheated by getting the generator from nightlies but recursive did work…
commandLine doesn’t like recursive too…

it seems that I’m doing something stupid

Can someone help me with the dummy steps?

yeah sorry, the current PG in the nightlies is broken right now, i’m trying to fix it. the devApps legacy PG should be able to generate all the examples but it hasn’t been tested in a while 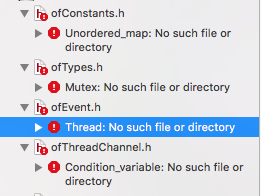 maybe you’ve got a quick idea about this too? Trying to run gcc4.2 from the xcpde-legacy

it used to run fine

yes gcc won’t work anymore, 0.9 requires c++11 compatibility and xcode stopped suporting gcc before that. you need to change to clang and libc++

my problem is that I need openmp… any ideas?
gcc5.2 maybe??

also, I saw your commit about the QtCreator! Is it going to be an option for Mac/Linux?!?!

i don’t think xcode supports gcc 5 you could probably install it and use the makefiles?

qtcreator is already working on linux and windows, i haven’t looked into osx cause most people use xcode there but it should be pretty straight forward since the build files are prepared to be multiplatform

do i get an empty qtcreator project from the projectGenerator or some other way?

thanks a lot for adding this!

There’s a wizard that allows to create OF projects from inside qtcreator:

the final download packages, and tonight nightlies if i manage to fix it : ) will have qtcreator projects for each example in windows mingw and linux

with qt I can easily work out my setup!