Is there any GUI that would currently allow me to do bind values from sliders by clicking and dragging from one slider to another like this: 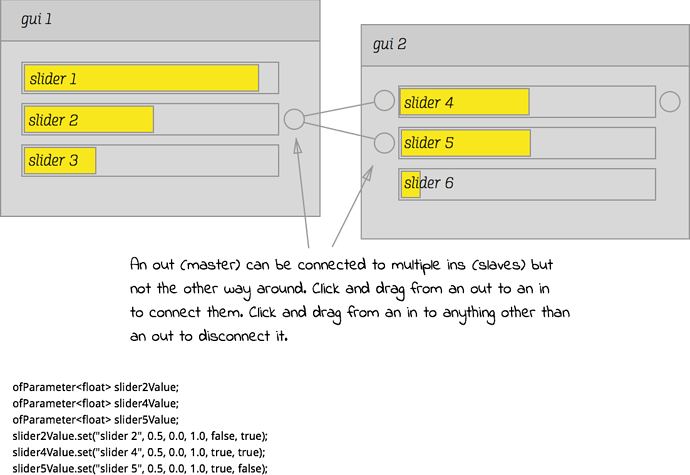 The “outs” would be graphically connected to “ins”, either with a direct line or a curved patch-bay-like connection.
the ofParameter would include two bools at the end (with default=false) to say if they they are masters and/or slaves.

If this is possible, would any of the GUI gurus here be interested in implementing this? @jvcleave, @braitsch, @frauzufall ?

Yes I did something similar, check out the masterSlaveControls example in https://github.com/frauzufall/ofxGuiExtended which should work with the current ofxGui. I haven’t used it in a while.

I am still rewriting the whole thing as a standalone gui addon in this branch and created a new repository for this feature working with it: ofxMasterSlaveControl but I still need probably a week or something to get the examples up to date, fix some last issues and push it to the master branch. But this is the version I am currently using for my projects.

Thanks @frauzufall, ofxMasterSlaveControl looks great and I’m keen to try out ofGuiExtended (have been keeping an eye on the new branch).

I’m looking for something similar to ofxMasterSlaveControl but with a patch-bay style interface, so that the it would be possible to view the connections. The idea is that I’d have an an audio analyzer on the left-hand side of the screen and could patch the output of its various faders/toggles/graphs to controls on the right-hand side which animate/generate the visuals in the middle.