Im trying to make my app more efficient in it’s drawing.
Xcode has this GPU debugger, should i listen to this? and can i do anything about it in oF?
thanks 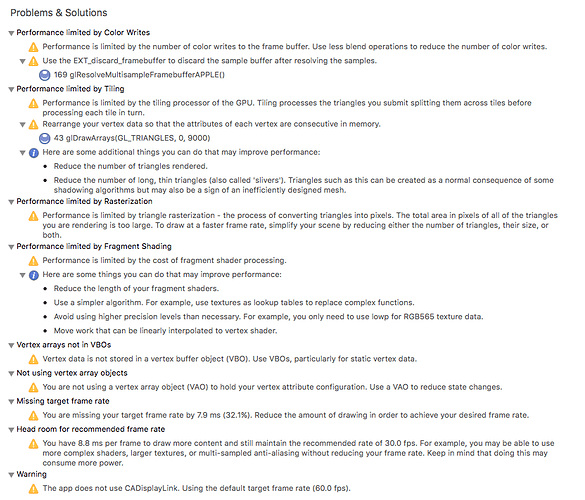 Yes, these are all very good recommendations, provided you are rendering on a mobile GPU. Items referring to ‘tiling’ suggest this is the case.

The programmable GL renderer in openFrameworks attempts to provide sensible defaults, and a general approach, which, in tandem with the GPU driver, should give good performance for most general cases.

If you want to get the most out of your specific hardware, then it’s worth looking into which methods of your draw call use the most of the frame time, and optimise these.

One of my favourites with openFrameworks and OpenGL is that you have always the option to “drop down” to the next lower level and issue ‘pure’ OpenGL API calls. If you do so, it’s worth keeping in mind that OpenGL is a giant state machine, and that any state that your OpenGL calls touch (like blend mode, or depth testing, or triangle winding order etc) might need to be somehow returned to some setting that will not lead to unwelcome surprises later on in your program flow. What I tend to do is that I set values back to openGL defaults when I issue pure OpenGL calls.

Before dropping down all the way to OpenGL it’s often a good idea to make sure you make the most use of openFrameworks methods, because these could be easier winnings:

There are things where some targeted OpenGL calls can do wonder, sometimes.

you are a superstar! thank you very much. Ill experiment based on your recommendations and report back!
thanks again,
Miles