I recently started playing around with openframeworks and i am facing a problem on an idea i work on.

I have a video playing and i would like draw it in a dynamic way so it’s not a rectangle but a more curvy/liquidy shape that will slowly change/move. 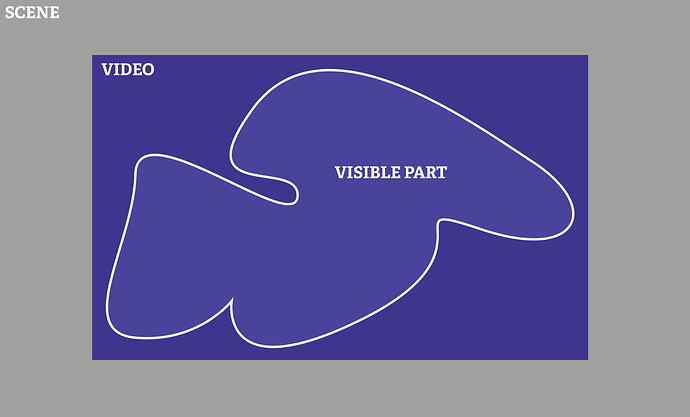 My initial idea was that i can draw the video as it is and then overlay it with a blob/mesh/whatever that will have a transparent fill but will be coloured on the outside to match the background.
I read also that it might be easy to make a curvy mesh and apply the video texture on it but i don’t know if the texture will be moving/stretching while the mesh will change it’s shape.
Maybe it’s possible to do it with shaders in an easy way like color displacement or something.

You can draw the shape into an ofFbo, than use it as a mask:

To draw the mask you can use ofPath.
Another idea may be to use metaballs: draw some disks into the fbo, blur it, then threshold the result:

Thank you very much for the guidance!!
Unfortunately we decided to leave the video as a rectangle cause we didn’t have much time to play around.
Nevertheless i tried your idea and drew some circles and moved em with some perlin noise and i got an idea of how it works.

When i have time i will look on how to blur the discs and try to threshold the result.

This result seems already interesting to me.

(If you need more help you can post the code of this last try and I will add the blur+threshold shader part).

Thanks for the reply.
I have finally time to play around with the idea again.
Here is the code i played around with so far:

Hi wasabis,
I proposed to add the shader part but sadly I have no time to play with you right now ! But continue to share if you’re stuck, or to show the result