Hi,
I followed Android guide and I’m trying to build an example for Android (I tried AndroidEmptyExample and AndroidImageExample) with no success

I think the significant error is:

I feel stuck, any clue please ?

Hi, I’m still stuck with this problem when the app is launching
It’s probably an Android Studio config problem but I don’t find what and how to set this

Hey @talaron last week I compiled oF with Android Studio for the first time (on Ubuntu). I put SDK and NDK paths and I built androidAssimpExample. It was compiled just in the first try without any problem. Did you check the sdk and ndk paths?

Hi @Rancs
I followed this guide http://openframeworks.cc/setup/android-studio/
I put NDK path in libs/openFrameworksCompiled/project/android/paths.make
I did not change some SDK path, where is it ?
thanks

I really don’t understand this Android Studio stuff yet

Anyway when I have first tried to import my own project into AS, it told me to enter the SDK path into Graddle and I wrote it inside the Project->local.properties file like that: 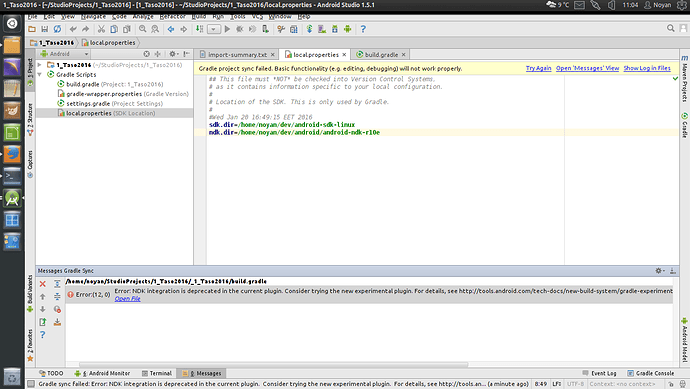 I remember I have also entered it to

After my own project, I also tried to compile androidAssimpExample with AS. Now I look at the local.properties file of the aAE and it writes that “the file is generated automatically by Android Studio”. And the SDK path is correctly included inside this file.

In my side, androidAssimpExample compiled like a charm. That’s why I wrote you might need to check your SDK and NDK path settings.

I’ve checked it, it seems ok.
OF guide tells to put ndk path in paths.make
NDK_ROOT=/Users/guillaume/Dev/android-ndk-r10e

Compilation is OK, I miss libOFAndroidApp.so during execution

I added ndk.dir=/Users/guillaume/Dev/android-ndk-r10e in local.properties
Still the same:
it compiles but fails at execution
couldn’t find “libOFAndroidApp.so”

It looks like it is not compiling, it is not generating the libOFAndroidApp.so file. Don’t you have any error/problem message on the console or logcat?

I’ve checked, I think it is compiling.
For instance, I get this line without errors output:

And a proud BUILD SUCCESSFUL at the end

But my apk fil is 280K, I think it’s too light if it should embed OF lib

And I don’t have any .so files in my libs/ directories

I compiled the androidImageExample on Ubuntu now and it is compiled just in the first try. My apk is 17.3 MB.

Thanks,
I don’t understand why I don’t have any .so files in my libs/ directory.
I’m gonna try with eclipse

I keep getting the same error with Eclipse !

libs/ folder doesn’t have any .so files and command “make AndroidDebug” is not returning an error but still doesn’t create any lib
I have to find what I’m doing wrong but feel a bit stuck

Which version of Java do you have installed?

I keep getting the same error with Eclipse !

Well you give here the output of Logcat but I think you should have some error messages on the console. Can you please check the console output?

Here is what I get: 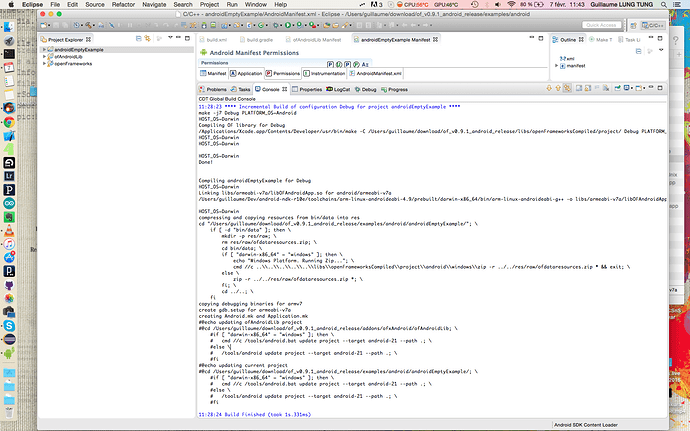 I am stuck me too. Maybe you can try compiling against Android-19.

Or maybe a MAC user might have a solution for this issue.

I tried both android-19 and android-22
Thanks Rancs for trying, I appreciate.
I will keep you informed if I find something …

Same problem here – did you find any solution ?