Hello all,
I’m working with the CLOUDS branch of ofxAVFVideoPlayer, and i’m finding that i can’t build the examples in xcode; i’m able to opent he projects, but for some reason the “play” button for building is greyed out; have never seen that before. 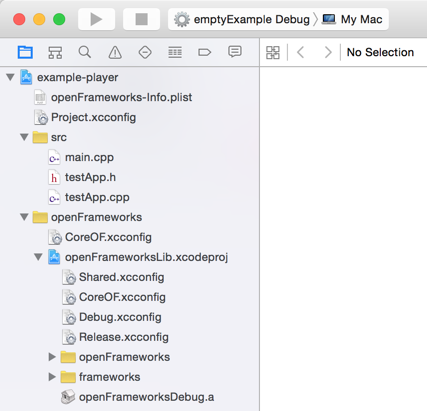 I have seen this before - This is pretty destructive (and probably not the correct approach) so back it up first.

What I do is click the “emptyExample Debug”>Manage Schemes>delete them and use the “Autocreate Schemes Now” at the top. Often I don’t get a Debug version doing this but am able to run the project

Hey @batchku, just took a look and it looks like I’m seeing the same thing where neither emptyExample Debug nor Release can be run. There’s another scheme called example-player that runs for me though, did you try that one?

You can also try using the projectGenerator to create a new project and include ofxAVFVideoPlayer as an addon. After linking the necessary frameworks mentioned in the readme, copying the source from the example & the sample test.mov over, it worked for me.

This is also assuming you’re running OF 0.8.4? If you’re using OF from github, or RC1 for the upcoming 0.9 release, you can actually use the standard ofVideoPlayer as that uses AVFoundation by default now