Cannot build any project/example on MacOS

I am coming back to openframeworks after not using for a while and I have problems to compile any empty project or any samples included. I tried my previous openframeworks 11.0 I had and also the latest 11.2 but I always keep getting error:

I’m using intel macbook and I’m on Big Sur 11.6 and Xcode 13.2.1.
I noticed that on each project have to check box “Do not show a diagnostic issue about build system deprication” in Xcode → File → Project Settings

I think there is something going wrong with path in error its tells:
/Users/patryk/Developer/tools/libs/openFrameworks/sound/

but my openframeworks is in:

I created in empty project with project generator and made sure path is correct but still the same error. 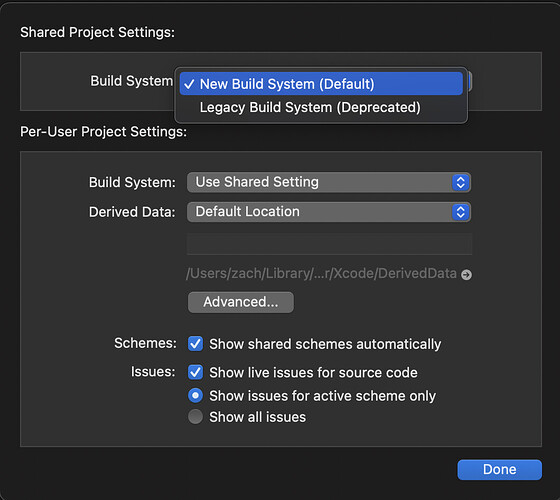 I’d also recommend downloading a brand new OF and trying any of the examples that it ships with to see if those compile.

Unfortunately nothing helped: I deleted previous version and downloaded again of_v0.11.2_osx_release tried /apps/myApps/emptyExample as well new empty project generated by projectGenerator (/app/myApps/mySketch) and in both cases cannot compile project. For legacy build I guess the same error as above and for new build I get:

I also get some warning related for iphone simulator for whatever reason even though I’m using osx versions which is weird:

even deleting all DerivedData didn’t help, so frustrating

I also found out for some reason the following folder is empty:

are you using iCloud Drive or something like dropbox with that folder ? I’ve seen sometimes issues where when you use a tool that is designed to save space on your hard drive, it may move files around or even delete them…

I haven’t seen the exact issue you are mentioning, but I am generally suspicious – some posts that aren’t your exact problem but mention iCloud Drive as a reason

Im sure this seems obvious to anyone, but just going to post just in case it can help someone out. I started using iCloud Drive with the new feature of having a sync/backup of the Documents and Desktop folder. All of my Dev stuff is in my documents folder, so i thought that this would be a good belt and braces addition to SVN and general backups. BUT NO. It puts .iCloud files everywhere as well as (for me) breaking links to libraries in Xcode (don’t ask me how or why). I turned iCloud drive o…

don’t use any iCloud for data storage and my dropbox is in completely different folder. But thanks for the clue! I’m using Forklift.app as my file manager and it seems probably that was the issue. When unzipped using build in macos Finder the /fmod folder is not empty. Just my Forklift.app always for some reason when unzip /fmod was empty - to make it even more weird when in Forklift I right click and ‘show archive content’ it’s showing correctly.

Anyway I tested again oF 11.2 after unzipping with finder and sample compile and works.
Thanks a lot for the clue!

ah that’s great to hear – thanks for following up! forklift must have something against fmod

I reported the issue to Forklift and they reproduced it so it seems that’s definitely something wrong on their side - FWIW in case someone has similar issue.