Could someone make clear what should I do to acomplish what this line tells to do:

this is in this page http://openframeworks.cc/setup/qtcreator/
and when I look in the Kits tab in Qt Creator I just don’t know where or what should I do.
I’m using the 4.1 version b.t.w.

thanks in advance
best regards,
Gil

ever figure this out? 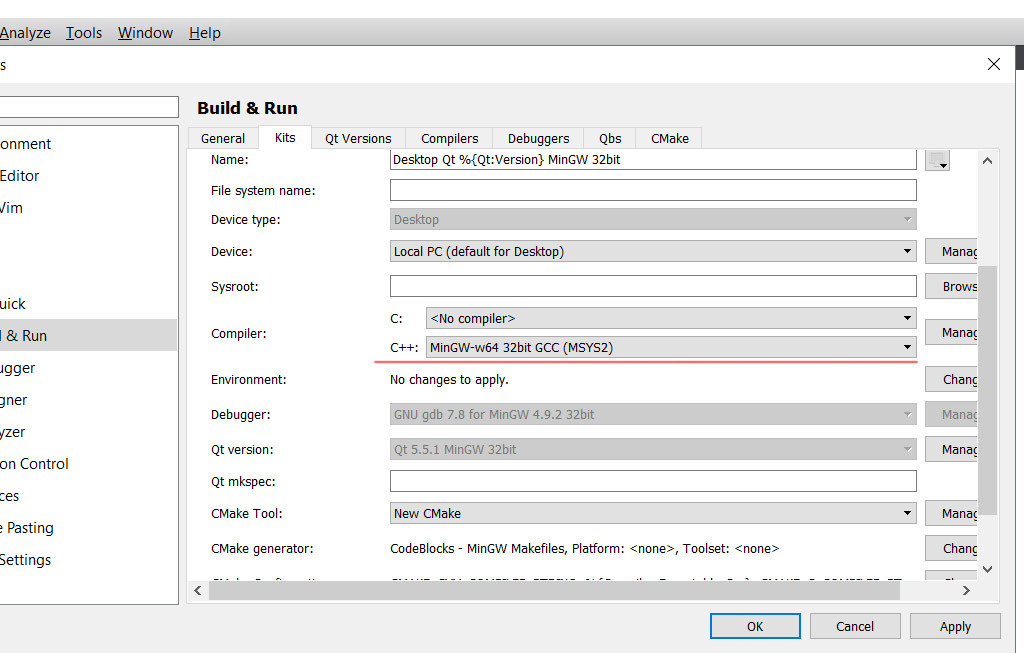 which distro? I’m on fedora and I’m dealing with undefined references, and I get the same exact problems with ubuntu 17.

Hi,
I’m using Ubuntu Studio 17.04, Qt-Creator 4.4.0, OF from the Github from one month ago. I had to do some fine tuning to start, but now everything is running as smooth as never. I’m still using the Project Generator from official OF, but pointing it to the other one.
That’s what I have. I don’t know if it’s a general solution to get everything going but based on my experience I would recommend something similar.

turns out project generator just may very well be what I was missing. assumed because there were plugins for vs / QtC that meant they were handling the init process for projects. Very confusing stuff but nonetheless Ive got a better grasp of whats going on now.

im trying with windows 10 , any help in setting up the OF dependencies and the variable paths i have tried it but nothing happens , qt 4.6.2 , compilers doesnt even detect the compiler path , and in my c:\msys64\mingw32\bin … there is nothing in the folder thought it would be having dlls’ or something…any help?

Does OF works from the command line ? If you have nothing in c:\msys64\mingw32\bin, it surely means that your MSYS2 install is broken.
You should also take care of running the install_dependencies.sh script that will install the compiler, make…
If the problem is just with Qt Creator, you may look into this post

Thanks loads ,lucky me now i got stuff in my c:\msys64\mingw32\bin , by installing a tool chain for both 32bit compilers and 64bit …through

but here … the terminal does nothing after - F:/of_qt/of_v0.10.1/scripts/msys2./install_dependencies.sh

I think I stumble upon this recently.
You need to edit the install_dependencies.sh to remove the following lines :

the cmd /c does not return and block installation.

Oxillo you are a super hero