Asking for hints: sonification of gpu-particles

I have an ongoing VR work employing over one million gpu particles. These particles have been created and managed via the great ofxGpuParticles (https://github.com/neilmendoza/ofxGpuParticles). The work cries for a direct generative sonification of these particles. 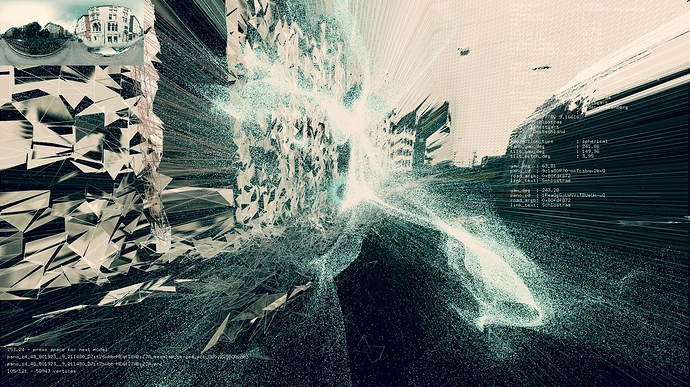 Over time, the particles are dropping off buildings and are clustering at specific spots, which cries for sonifying them into a 3d-soundscape. I have the 3d-algorithms all ready via fmod and am currently playing back a pre-recorded soundtrack via that engine.

My ideas and questions before starting the generative sonification:

your comments and expertise are very welcome.
if you wish to see the work in its current state, find it here: https://1001suns.com/dust/

All best and stay healthy,
Michael

I’m not exactly clear what you are asking here, so I’ll just throw out an idea.

You could look at doing formant type synthesis with a bunch of band pass filters to get vowel-y sounds. You could subdivide the 2d plane and map it to a bunch of fixed filter bins then use the density in each part of the subdivided plane to determine the resonance or frequency offset for each filter.

You could also use downscaling to successively smaller fbo’s with judiciously chosen texture filter coords to reduce your full res float buffer to a smaller one making cpu analysis more computationally tractable, similar to a kawase style bloom http://genderi.org/frame-buffer-postprocessing-effects-in-double-s-t-e-a-l-wreckl.html

@dizzy Hey dizzy, thank you for the reply with inspiring ideas…best