Any recommendations for a small Raspberry Pi screen to display oF projects?

Has anybody had any luck with one of the smaller screens and a Raspberry Pi to display openFrameworks projects?

I’m in the market for a small-ish screen (ca. 10cm), but don’t really know what to get.
I’ve been eyeing the Pimoroni Hyperpixel ones, but they seem to have some downsides, like for instance not being able to show anything, when the OS hasn’t booted to desktop.
I also have the official 7" touchscreen, but that’s too big and I’m already using it with another Pi.

Any recommendations or other tipps?

I only used two, one HDMI, 800 x 480 which I like, (XPT2046 Touch Controller, 5inch hdmi display)
and another one smaller, connected to GPIOs which I think it is difficult to use. both of them are stylus touchscreen but I never bother calibrating.
they don’t have a very good angle of view if it matters, I’ve been only using for software output, interface, debugging, etc.

Thanks for the reply. I’m primarily looking for a display. Touch functionality isn’t really required. The mediocre viewing angles might pose an issue for me since, it’s meant as display, something like a small digital photo frame.

They’re very small but the Pimoroni HyperPixels are gorgeous.

I’ve been using some small screens some time ago and figured out that any (cheap) screen is OK as long as it connects via HDMI. Some even come with a compact U-shaped HDMI connector. All the screens that connect on GPIOs don’t support hardware acceleration, making them worthless for oF usage.

All the screens that connect on GPIOs don’t support hardware acceleration, making them worthless for oF usage.

That’s good to know! Unfortunately, I’ve already purchased a Pimoroni HyperPixel.
If I don’t get it work with oF, I guess I can still use it for another project and buy a cheaper HDMI screen.

I’ll keep this thread updated with my findings.

Here are a couple of things to note about the HypePixel:

And here are a couple of remarks concerning openFrameworks and the Raspberry Pi:

So far, I really like the setup! The display is nicely lit and sharp. It features a resolution of 480 x 800px.
My test project - a self-avoiding walk simulation inspired by this video by Daniel Shiffman - runs great!
It was run with the startx ./bin/selfAvoidngWalk -- -s off command from a terminal, connected via SSH to the Raspberry Pi.

The colors really pop! I’m super happy with the display so far. 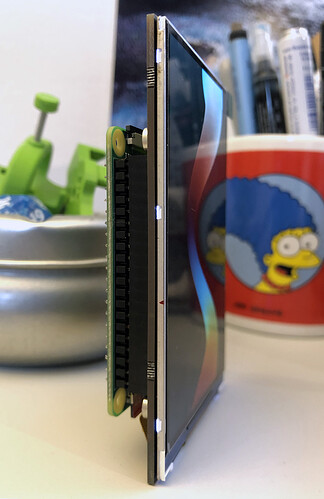 And you can really get a small profile of the overall contraption. With the Raspberry Pi Zero 2 W the thickness, including the screen, is about 1cm (0.39").

that is super cool ! such a great form factor - how was the speed without acceleration ? were you able to make a comparison? (also glad you like the video - am taking a break for a little bit due to a new gig in a new country but have more planned)

how was the speed without acceleration ?

With the two examples above, I got 60 FPS easily, but keep in mind that they’re not too demanding. I still need to try some heavier examples of mine.
Honestly, I currently don’t see any difference between my desktop computer and the Raspberry Pi, in terms of running the compiled binaries.
The Pi Zero 2 W seems to be powerful, especially considering its size and price. I believe it’s equipped with a quad core CPU. They could have bumbed the memory to 1GB though. We’re stuck with 512MB for now.

Are you kidding? I love your videos, even the cooking ones. Great stuff and so creative! I’m glad that you haven’t given up on your YouTube channel yet.

BullsEye isn’t working quite right though and compiling from a shell through ssh rather than on a screen will hang, and not output an error - bit frustrating as the compilation will already take a little long

-.
Also need to remove a flag for compilation.

I’d tested it last week too, but I couldn’t get it to run. And after some research, I simply gave up on it.

@diff-arch LOL - i didnt think anyone saw the cooking! - I have more in the edit (making ramen noodle, soy eggs etc) waiting to be finished.
I’ve been using pi 3 & 4 but not tried the zero 2 yet - really good to hear you got it all working ok

I have more in the edit (making ramen noodle, soy eggs etc) waiting to be finished.

Looking forward to those, if you ever decide to release them.

In fact this screen have a nice angle of view. I’ve just tested here.
there is a little bit of reflection probably because of the touchscreen layer.

Yes, really nice! Even at the advertised 160°, the viewing angle is comparable to current high-end smartphone screens.
My photo above that I’d taken from the side to show the overall thickness of the contraption probably doesn’t do it justice, since my screen still had the display protector foil on.
I don’t have the touchscreen one, since I need smaller bezels for my project, and getting the touchscreen to work with oF is probably rather difficult (judging from older posts here about different RPi touchscreens).

I’ve used the 7" Waveshare screens (without touch version) and they look quite good:

here is the 5" one:
https://www.waveshare.com/wiki/5inch_HDMI_LCD