Since we released 0.9.3 there have been a few issues that have come up with IDEs that necessitated a 0.9.4 hot-fix release.

Mainly issues were with Xcode 8 / OS X10.12 SDK needing a AVFoundation based grabber and QT Creator not working after being updated to latest version.

0.9.4 has a new AVF grabber, so it would be especially helpful if people on 10.12 or using Xcode 8 could test the videoGrabberExample and make sure it works with their capture hardware.

It would be great if people could download the zips for the platforms they use and see if they notice any issues. This is a minor version with only fixes so it should be totally compatible with 0.9.3 projects.

You can download the files for every platform from:
http://openframeworks.cc/versions/v0.9.4_RC1/

Since this is a small release there’ll probably be only one RC and there should be a final release sometime by the end of next week.

Thank you for helping test the 0.9.4 release!
Change log is below.

2 Likes
MacOS 10.12 Sierra/XCode 8 - Quicktime deprecation workaround
QuickTime/QuickTime.h: file not found
Serial communication not available until opening arduino serial monitor
Problems getting started, Build fail due to issues with the QTkit and Quicktime.h
Serial not working
OF 0.9.4 and QtCreator 4.1.0 (Linux)
danomatika September 28, 2016, 1:01am #2

Works for me. Noticed a few things:

I have a problem with the qtcreator project on arch linux 64bits. Helpers.js fails with "of_v0.9.4_RC1_linux64_release/libs/openFrameworksCompiled/project/qtcreator/modules/of/helpers.js:-1: error: error: There is a problem to detect the ‘find’ command. The problem is where.exec("where.exe", ['find']); It looks like this is the windows version. Further down it is looking for msys2.

Also the project generator app is missing. There is only the commandLine app and ofxProjectGenerator.

the qtcreator problem is now fixed in the 0.9.4 branch, there was an error introduced by a last minute change for qtcreator in msys2

This topic is now a banner. It will appear at the top of every page until it is dismissed by the user.

Thanks for doing this. I get new build error on OSX with QtC 4.1 using the git branch

should be fixed now

Both in 64bit debug mode.

just posting this issue to make sure we have feedback in one place:

Thanks @danomatika @JGL - I’ll add something to the videoRecorderExample so it does a warning for 10.12 and up. We’ll probably drop it or update for AVF in the next big release.

I believe MAC_OS_X_VERSION_10_12 is always defined if the SDK matches or is newer. For example in that SO link for 10.9 all versions up to and including 10.9 are defined.

So I think we are okay there ( unless I misunderstand).

Thanks for checking out the releases!
Theo

So I think we are okay there ( unless I misunderstand).

The oscParametersSender gives an error when handling the UI 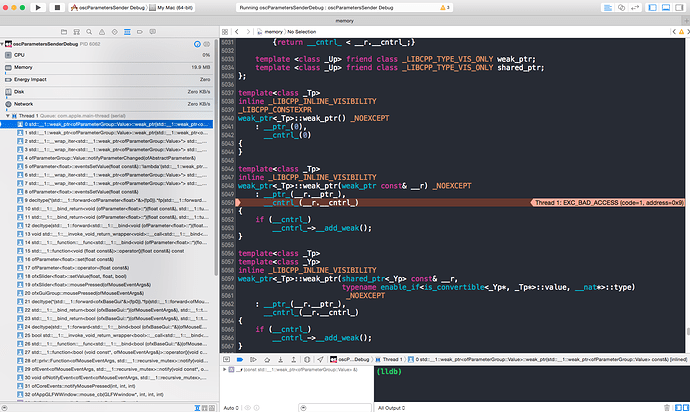 Can confirm the issue reported by @xumo
It seems to only happen for me when I check the “check” bool in the gui.

Here is another image of the stack trace.

Just wanted to say that it’s nice that 0.9.4 RC1 is out the same day as CUDA 8, which is the only CUDA version compatible with VS2015.

same problem for me

I can confirm the oscParametersSender bug too.
But for all the other examples, i did not find something that brakes on macOS 10.11.5 and xcode 7.2. Congratulations!

I think the problem comes from the Qbs ‘Rule’ that have been introduced to replace deprecated ‘Transformer’.
I have done a PR on MSYS2 but cannot test it on Mac. Do you mind to have a look ?